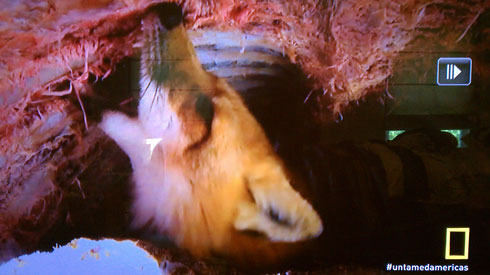 I really enjoy nature television shows. When I saw promos for National Geographic’s Untamed Americas series, I immediately set a DVR timer for it.

Overall, I think the four-episode series was a little on the weak side, but I get the impression that their field crew got a handful of amazing video and shots, that series like this are created, so they could have a place to showcase them. For every amazing footage of a spirit bear or an owl, there are usually clips of wolves or cougars and other predators failing at capturing their prey.

But if there was one thing that genuinely stuck with me watching the series, it would have to be this fox somewhere in the arctic. 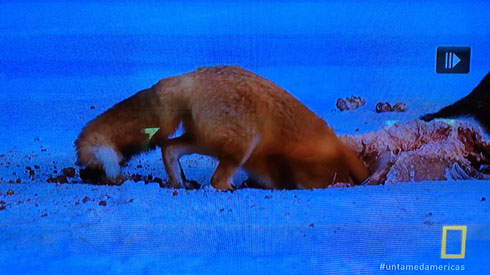 As is the norm with wilderness shows, but up on the list of wild animals’ greatest challenges, is food. And this fox is no different from any other wild animals in that it too, has to eat. But this one had a stash to live off of, for this particular winter, in a dead elk. But not only did the elk provide sustenance to the fox, it also provided shelter. A tasty, tasty, edible shelter.

Seriously, I really didn’t believe it when I saw it, but the fox actually went inside of the elk carcass, and as seen above, proceeded to eat the remains of it, from within. That’s the equivalent of us boring out peach and eating it with a spoon from a small hole in the side, or cooking an entire cow whole, and diving our heads through a hole beneath it and sampling the filet, flank, ribs and liver from inside of it.

Obviously, being up in the arctic and nature’s freezer, the food might have been a little cold, but it was probably being preserved way more efficiently than if it weren’t in the arctic, but the fact that the fox is eating the elk from the inside is something I’d never have imagined before.