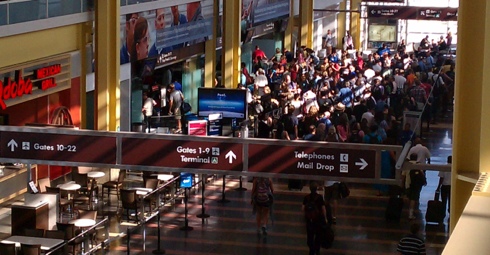 Since I was yet again unable to make it out of my personal purgatory, Washington Reagan National Airport, I’m stuck at my parents’ house for an extra night. I sat around for a few hours once again baffled at the endless array of employees putting their families through standby hell, unable to move up the list myself, before debating on whether or not to punt on the rest of the day and try to salvage some non-airport sanity and spend some time with the parents alternatively. When I saw a girl throw up directly into a trash can, I knew it was time to bail. I’m guessing she might have been preggers, but it also happened to be in front of McDonald’s.

Since if all went according to plan, I wouldn’t be here, I’m guessing this is the night one of the brown recluse spiders in the basement, kills me.

Now that I have this unexpected free time, I’ve been musing about this most recent trip up to the old home. I’ve decided that officially, Virginia is a worse place to drive than in Georgia is. Georgia is far, far, far from perfect, but I’ve decided that I can tolerate driving with insanely aggressive black drivers a lot more than I can tolerate driving with petrified and passive drivers from all reaches of the Eastern hemisphere.

Furthermore, the endless array of road projects that the old Commonwealth undertakes guarantees that Virginia drivers never have a reprieve from worrying about what part of their commute is going to be plagued with orange cones and barrels littering the shoulders and causing congestion and standstill, crippling traffic. In the span of three days, I endured traffic on both ends of 495 that happened in the morning, afternoon as well as the unexplainable evening. Local roads that I thought I once knew weren’t much better relief.

Virginia has an estimated $5 billion dollar road budget annually, and regardless of what needs to be done or not, like any functioning department, they see fit to use all that money on monotonous and redundant road projects no matter what. It’s like if Dr. Who hopped into the tardis and went into Virginia circa 2154 AD, there would be no doubt still be crippling traffic on the roads and for the flying cars and shit. It’s like it’s what Virginia is destined to be known for, forever and ever, if it continues like this.

Sadly, after all these trips where I get stranded and have to deal with bullshit from time to time, I sometimes feel like I’m really beginning to resent Virginia. It’ll always be my place of birth, and the place where I was born, raised and educated, but I’ll be damned if I don’t feel disgusted and aggravated with this place more often than used to with each passing trip.