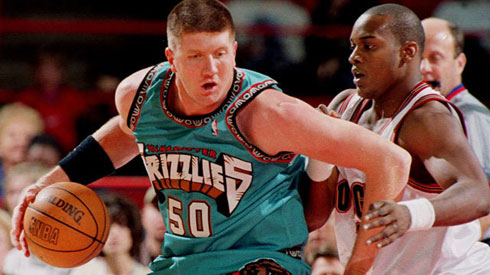 Huzzard and I are at an arcade, playing on a broken NBA Jam machine.  Along comes former NBA player/great white hope Bryant Reeves and some unknown person, and they challenge Huzzard and I to a game.  We choose the Spurs and he chooses the Knicks, and in no time, we’re dominating the shit out of him like 41-11.  The game freezes on us, and before we can get bewildered and upset, these two kids show up, wanting to get Bryant Reeves’ autographs.  One of them was fat and one of them was small.  The fat one was the alpha amongst them.

For some reason, they want these pre-paid gift cards autographed, and oddly, on the signature strip.  There are a lot of them, but Bryant Reeves gets to work signing them.  After a few minutes, he asks Huzzard and I to help out and start signing them in his name.  So we do.  Not long later, I notice that the name imprinted on all these cards is Bryant Reeves, and that he’s basically unknowingly signing all these cards that will probably be used as real currency.

I make some snide remark to the fat kid but continue regardless to sign Bryant Reeves autographs.  Fat kid’s parents show up all happy and excited, at being in the presence of Bryant Reeves, or knowing they are going to get all this free gift card money to use.   I already forgot what they did or said; it didn’t really piss me off, but for some reason it still set me off instantly, and before I knew it, I had these cards in my hand, and I simply flung them all up in the air, and made a huge mess in the entire arcade.  People stopped what they were doing and were staring over at this sudden scene.  For whatever reason, the cards were now worth nothing, and Bryant Reeves left to go play some poker.  The fat kid is pissed and asks why I did that, and I tell him to essentially fuck off.  The dad gets in my face, and I tell him off too and make him feel like a bitch.  They all storm off, defeated, and the cards are worthless despite the fact that they’re all mostly signed; I don’t know, it’s a fucking dream.

Afterward, Huzzard and I are standing there with stacks of worthless gift cards that have Bryant Reeves likeness on it, and then I realize that I might as well get his real autograph; not on the signature strip like I’m trying to do something crooked, but in that sarcastic way that it would just be ironically awesome to get Bryant Reeves’ autograph.  So I pick up the two different designs of the card, and go to the poker table where Reeves is playing.  He’s cool and friendly about the whole situation, and I ask him for autographs, and he obliges without any problem:

To Danny and Huzzard, my [n-words].  Bryant Reeves

I woke up with a giant smirk on my face, feeling really amused.  This dream was so great I got out of bed to get this down so I wouldn’t forget it in a groggy haze.