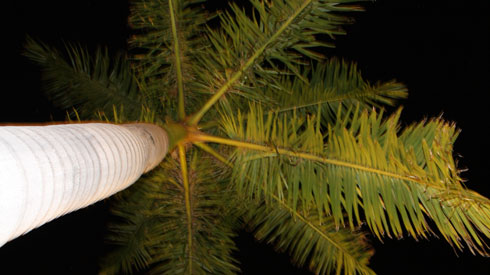 This is a picture I took in my first night in Mexico.  Because I was laying down on a bench.  Because I was drunk.  And this palm tree was all I could see from my perspective at the time.

Prior to my trip to Mexico, I had declared to myself that I wanted to kill 50 cervesas down in Mexico.  I wanted to drink Dos Equises, Coronas, Sols, Modelos, and whatever other Mexican beers were considered local, as opposed to the Bud/Miller/Coors swill readily available in the States.  I had this ambition that I would mark all my beers as I conquered them one by one, and would have a nice album of photographs documenting my douchey conquest.

Well, that didn’t happen.  I probably had like 6-7 beers throughout the entire trip, and aside from the cans of Dos Equis, I actually have no clue to what kind it was based on the fact that they came out of a tap at one of the random bars, with no discernible handles on it.  Not to mention just about every drink served was presented in reusable plastic or glass cups, and I was pretty sure there would be a hearty objection if I were tagging the resorts’ kitchenware with numbers.

But that’s not to say I didn’t do much drinking; quite the contrary, I drank myself to oblivion on at least two occasions that I can actually remember.  I can’t necessarily say I’m proud of such indulgence, but seeing as how I have occasional douchebag tendencies like glorifying my alcohol consumption, here we stand.

Part of staying at an all-inclusive resort meant that even the booze was included in the stay.  With bars located pretty much everywhere in sight, but most importantly the pool and the beach, it was never a reach to get something to drink.  Part of staying in Mexico meant that the climate is scientifically measurable as “balls-sticking-to-you-hot-and-humid.”  With that in mind, I’ve done pounding beers in the hot sun in my life as a baseball fan.  I sought out something different.

So instead of getting hammered on beers, I ended up getting hammered on a litany of tropical frozen and fruity drinks, all of which contained varying amounts of rum, tequila, vodka, or all of the above.  And Bloody Marys, lots and lots of Bloody Marys.  Typically, I stay away from hard shit because liquor can fuck me up, but being an all-inclusive resort, the pours are a little on the lighter side; however, even light pours add up to some drunken stupor after about 15 drinks in the pool.  I have a bruise on my hip from an embarrassing spill to attest to that, admittedly.

I didn’t do 50 cervesas in a week like I had originally wanted, but in the end, it’s safe to say that I did however do well over 50 alcoholic beverages entirely.  Not necessarily something to really be bragging about, but what the hell, it was all for the sake of pursuing a good time.