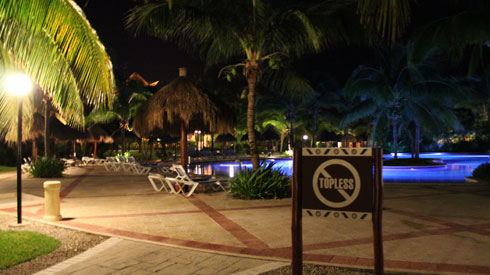 “Whatcha reading?” she asked, coming down the lobby steps behind where I was sitting.

The voice was mostly unfamiliar, but I had an inkling of whom it could possibly be.  I looked up, and she was now in front of my table.  She smiled, and asked if anyone was sitting with me.  I said no.  She asked if I minded if she hung out for a little bit.  I smiled this time, and said by all means.  She sat down, drinking a strawberry daiquiri.  A waitress came by, and she ordered another.  I ordered another Bloody Mary.

We met briefly the night before.  Her table was next to mine during dinner.  She was in a party of three, with another couple.  When my table’s food arrived, both our tables got quiet, and all eyes were on the entrees brought out to us.  She glanced over and said to me that I should let her know how my entrée was.  I smirked and said will do.  In all honesty, despite thinking it was good initially, the more I think back to it, I didn’t really think it was all that great.  I ended up forfeiting half of it, because I was full on snack bar junk food, and the far superior seafood ceviche not too terribly long ago, and I simply didn’t want to finish this fish.

After dinner, I ran into her outside the restaurant while I was going to get some mosquito repellant and her group was just leaving.  I told her the fish was “just ehh.”  She laughed and told me her dish was too.  Apparently the phrase “I thought this would be better” could be used to describe a lot of the food stuffs available at the resort.  She told me she and her friends overheard the discussion at my table, where I was re-telling the story of the Mexican merchants calling me “Ching-Chong-Chang,” and they had a great deal of amusement from it.  I laughed.

She told me her name was Shay.  See you around.  And then she and her friends were gone, whisked away by a resort shuttle, leaving me to wonder if I’d run into this obviously-also single person in the resort full of couples again.

We chatted for about 45 minutes, about random things.  I ended up being late to dinner by 15 minutes as a result, and I was pretty well aware of it too, but I didn’t really care.  My party gave me shit about it too.  I didn’t really care about that, either.

Shay was cute, and had hazel eyes.  She was surprised that I was from the States, considering she could tell that I was with several Canadians; she was from Canada as well, and apparently all Canadians can tell each other apart by listening to accents and shit.  She used the term “pwned” when describing how she was pwning people at pool at the Hacienda the night before.  Despite my AzNness, I told her that I kind of suck at pool, and play left-handed despite being right-handed, because that’s how I’m comfortable shooting.

We talked about the things we had done while on the resort up to the point, and compared activities, and which sub-resorts had the better pools, restaurants and such.  I asked Shay how much longer she was staying, and she said that she was leaving tomorrow.  I was staying for three more nights.  Of all the people to repeatedly see throughout the first few days and nights, I guess it kind of figures that the chick I end up meeting that’s giving me positive signals, I meet right before she’s leaving.

No matter.  As not to feel like too much of an asshole to my compadres, I finally tell Shay that I’d love to continue speaking with her, but I really did agree to meet up with my party for dinner.  Shay tells me similarly; she actually attempted to leave our conversation earlier, but didn’t because I was clearly so charming, or maybe it’s that she got the sense that I had, that we were both kind of in the same boat.

We walk down the path together.  Before we go off in our separate directions, I tell Shay that I’d like to see her again. I’m not sure what your plans are in the evening, but my friends and I will likely be poolside, killing off the rest of our daily Dos Equis-es.

She gives me a coy smile.  Maybe I’ll swing by then.  I like her hazel eyes.

I’d be lying if I said I went through the rest of my evening without distraction.  It’s not like a guy in my position has any right to any grandiose expectations, but the idea of a little bit of that feeling of the chase and the game of flirting and trying-to-be subtle glances made me a little bit hopeful.

I think I mentioned it before, but just about 90% of the resort were people there with significant others or spouses.  There really weren’t a whole lot of single people on the entire premises, it seemed.  I like to tell myself that somewhere in the back of her head, Shay might have felt like she was in the same position as I was; an odd number, a plus-one, a single person in a resort full of couples.  And that such circumstances is what led to our easy-going friendliness upon a quick introduction, because sure, we enjoy the company of those we traveled with, but at the same time we’re very well aware of our empty beds and having nobody to really be with.  Sometimes we want to step away from the couples and be to ourselves, and sometimes we hope for chance encounters of people in similar predicaments.

We gathered poolside as planned, and I’m already feeling warm from two glasses of red wine liquid courage and some cervesas.  In the back of my mind, I’m wondering if Shay really was going to swing by, or if I was just blowing smoke up my own ass.  She told me her own dinner was one of the late ones, so I didn’t expect to see her any time immediately, so whether she showed or not, I still just wanted to enjoy another poolside evening looking at palm trees and a fall sky while it’s still summer weather in this part of the world.

But then I saw the ripples in the pool water.  Despite some cursory rain on the first day of the trip, it hadn’t rained at all over the last few days.  Despite the fact that the popular belief is that it rains every day in this part of Mexico, it had been beautiful, albeit hot-as-balls weather the three prior days and nights.  And then the ripples eventually became splashes, and my party and I were suddenly scrambling to get under umbrellas.

It didn’t take long before the party decided to call it a night, and head back to their respective rooms.  The rain began coming down pretty hard, and I can’t blame them for wanting to get under some shelter.  But on that note, I wouldn’t have been able to blame a single girl from wandering out into a sudden monsoon for nothing but an uncertain encounter.

I felt a pretty deflating feeling at the realization that Mother Nature, of all things, was putting forth her best effort to cockblock me on this night.

Despite the dismal feeling of knowing that tonight was not going to be any better of a night, I was the last to throw in the towel and head to bed.  I sat under an umbrella and watched and listened to the rain for a little longer than any person with any dignity might have considered, but part of it was the fact that the resort had been making some pretty strong cappuccinos all weekend, and I had one following my dinner and frankly I wasn’t tired.

I’d say I never saw Shay again, but the truth is I saw her the next morning.  With her friends, and with her bags, waiting in the lobby, for their shuttle to whisk them back to Canada, to their regularly-scheduled lives.  We spoke for about five minutes; pleasantries and brief summaries of our experiences in Mexico, but it was a completely different mood.  The come down brought on by a vacation ending, and the sparks from the nights prior were undoubtedly gone.  Extinguished by the torrential rains dumped onto the Riviera Maya just eight hours prior.

Naturally after Shay left, the weather cleared up, and it was an absolutely beautiful day.  The best one of them all, in fact.

Something funny?  The last time I pined on about a missed connection, take one guess to what her name was?

Two times is a coincidence, but if I ever randomly run into a girl that I’m attracted to and her name is “Shay,” then all bets are off.  It’s fuckin’ party time.