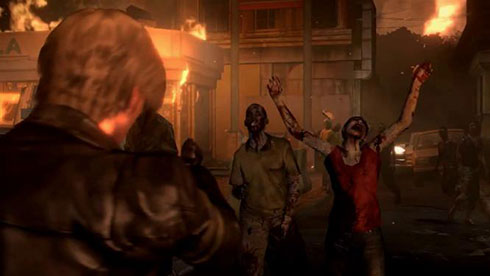 In spite of the fact that the general consensus on RE6 was less than positive, I know that I don’t give a rat’s ass about game reviews, and decide for myself on whether or not it’s something I like or not.  For the most part, I ignore all reviews whether they were good or bad, but it was hard to not take notice of every time RE6 was subtly mentioned whenever there were year-end articles about failed games or the year’s biggest disappointments.

I got RE6 as a Christmas gift, and I’ve been playing it recently.  I’m four chapters into Leon’s mission, and have not started anyone else’s, and I’ve just entered China.  And my impressions of the game so far?  To be perfectly honest, I’m really not that impressed so far.

For starters, I was happy when Jen had gotten me the game, because we both knew that I was going to get it eventually, and in the spirit of Christmas, she did the smart thing and got me something that I won’t have to spend my own money to get now.  But from the onset, I grew suspicious as soon as I opened it from its packaging, because upon opening the case, I discovered that there was no instruction manual at all.  Not that I really use them at all in the first place, but it led me to believe that there would be little change in the control scheme from RE5, which I actually grew to prefer over all prior RE games, which would have been a good thing.

But it didn’t.  RE6’s controls are somewhat similar to RE5, but at the same time different, faster, and the menu system has been changed yet again.  And lots of the buttons have been switched up, and frankly this far into the game, I still don’t have a concrete understanding of what everything does.  Quick-shots, falling backward into defensive shooting stance, thanking partner, etc, etc.  I’m still learning the controls while steadily moving forward.  At least an instruction manual might have been able to bridge these gaps a little bit, if there were one.

The gameplay itself is fast-paced and exciting.  Unlike prior RE games, there are parts that don’t necessarily have a set number of hostiles that appear, and sticking around to look for ammo, crates and skill points isn’t always a leisurely activity, when zombies start dropping in from random vents or tunnels or holes in the wall or ceilings.  On the flip side, this is actually a bit of a nuisance, since you can’t really find a spot to take a minute or two to organize inventory; currently, I’m leaving sniper ammo around because I don’t have the inventory space for it, because I have all these fucking remote bombs that have served me zero purpose so far taking up spots.  It also sucks that I haven’t been able to use Helena as auxiliary storage space for everything else like I was able to use Sheva in RE5.

Speaking of fast-paced, one of my biggest gripes of the game so far has been the broken aspect of the gameplay when it comes to events in real-time.  For example, I’ll be in a skirmish, and I happen to pick up a key; control is relinquished for a few seconds while Leon marvels over this key, and when I resume control of the character, the hostile that I had been evading is right up on my ass is in prime position to land a cheap hit or kill me outright, depending on what kind of creature it was.  Or, I’ll find a lever on the wall that requires the AI partner to pull a corresponding lever, but while I’m waiting for the AI character to catch up to me, a zombie has crawled out of a hole in the wall, and while I can’t control my character, the zombie begins strangling me, which gives me back control, but at the cost of some cheap damage loss.

Overall, I’m not entirely impressed with RE6 so far as I said.  It might be still too early to decide, but the story seems kind of weak, a little predictable, and possibly getting too old.  After seven Resident Evils in the existing storyline, I honestly didn’t think there should have been a sixth game to begin with, what with what the conclusion to RE5 was.  It’s nice to see Ada Wong again, but I’m disappointed in that Claire Redfield isn’t given another role in a game, considering Chris has been in three, and Leon pretty much had his own entire game in RE4.  No Claire, but they’ll have Sherry Birkin?

A conflict I’m having with myself is wondering if my diminished enthusiasm simply has to do with if the game really is sub-par, or if I’m just getting older and possibly losing interest.  This also makes me wondering if those reviewing the game with similarly diminished enthusiasm are a lot like me and are well versed in Resident Evil lore, and are aging like I am.  It’s really difficult to tell, sometimes.

Regardless, I still have every intention of playing all the storylines to completion, because I do want to see how the stories transpire and overlap, and form one (hopefully) cohesive story, but I’m not feeling the innate desire to perfect and go back and get S rankings on every aspect of the game like I did with RE1, 2, CV and 5, but maybe if I get unlimited ammo weapons, it would be worth mowing through the game in second or third conquests just for the fun factor of blowing everything away.

I’m really hoping things improve, I adapt and integrate better into the game’s play, but unfortunately my first impressions of the game aren’t really that great.