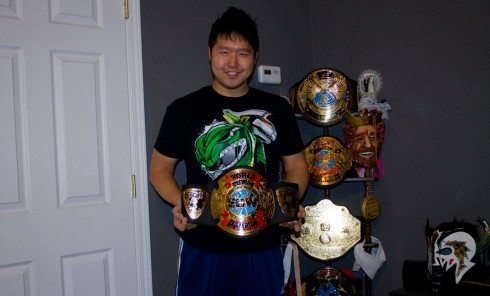 But for reals, this is the last one.  Despite my initial protests that I didn’t want to end with an odd number, I honestly for the life of me can’t really think of any other belts that I’d want.  I’m not remotely interested in any of the belts in current WWE circulation, nor do I want any current, or previous generation of any particular belt that I currently have.  The only belts out there that I would even consider are limited to titles such as WCW Cruiserweight, WWF Light-Heavyweight, ECW Tag, WCW Television or WWF/WCW Hardcore, and for a variety of reasons, I don’t want any of those.  I also have zero interest in any TNA replica belts, or any boxing or MMA championship belts.  The ONLY belt I would really be enthusiastic about getting my hands on would be this classic OVW World Championship Belt, but considering they were like the double-A low-budget minor league affiliates of the WWF for a spell, it’s hard to imagine any actual replicas of their belts were ever made.

So I’ve pretty much finished off my collection whether I like the number nine or not.  But honestly at this point and with however many hundreds of dollars I’ve blown on expensive and useless replica wrestling belts, I can say that I’m okay with that.