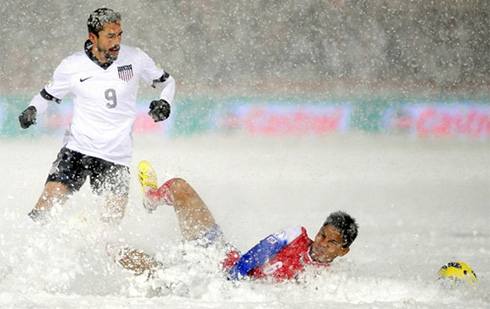 The United States’ soccer victory over Costa Rica is the equivalent of the dastardly heel professional wrestler who just snuck a cheap shot in against their opponent without the referee noticing, and pointing to their head to emphasize their use of brains to get the upper hand.  Long story short, a World Cup qualifier between the US and Costa Rica was played in Colorado, a state that is known to get snow fairly regularly until about late-April.  Needless to say, it snowed pretty heavily during their match, but the game went on, and the Americans eventually ended up winning 1-0.

The Costa Ricans are crying foul over unfair playing conditions, to which frankly I don’t think they have any ground to complain.  An objection should have been made well in advance, once it was decided that Colorado in the month of March was going to be the site of such an important game.  It’s as well known that Colorado is a cold place in March as well as its known that Costa Rica is vastly tropical; the fact that snow could have been a threat and actually happened should not have been any surprise, and could have been addressed well in advance.

Anyone who watches any sport of any kind knows that nothing is quite the same when played in the state of Colorado.  Visiting teams who play the Nuggets or the Broncos in Denver always cite that the thinner mountain air wreaks havoc on their stamina and endurance.  One fat football player actually died from a combination of having played in a brutal game, the thinner air and sleep apnea.  Baseball hitters love Colorado, because the high altitude and thin air makes their flyballs soar, boosting home run totals.  But on the flip side, it’s hell on the outfielders who have to cover a gigantic outfield to compensate, and worse on the pitchers whose pitches don’t exactly move the same way in high altitude as it would closer to sea level.

There are professional athletes who are so convinced that playing in Colorado is the pinnacle of physical testing to the point where they attempt to simulate Colorado conditions from thin air and pressurized rooms, believing that if they can excel under Colorado conditions, they can thrive anywhere else.

Chalk one up for the home team for simply outsmarting the Costa Ricans.  Bring them not just to the United States, but to fucking Colorado, in the midst of a snow storm.  Not only do the tropical-weather Costa Ricans have to deal with freezing climates, they now have to deal with the snow.  Some of these guys have probably never even seen snow in their entire lives.  No better way to beat your opponents than to push them as far as possible out of their comfort zones, and such a game is pretty definitive of how it was for the Costa Ricans.

They can complain all they want, but it’s probably going to do them no good.  QQ moar noobs Costa Rica.