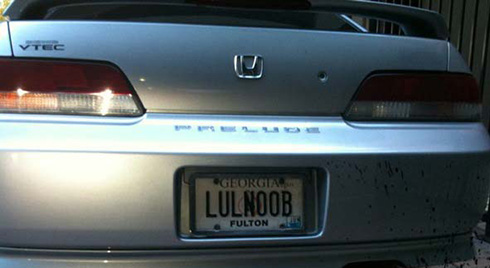 Personally, I think that if you cannot get the vanity plate that you want, you should just give up.  But unfortunately not everyone would agree with my opinion, and when the going gets tough, the tough start seeking out substitutes.  Most often times it involves replacing letters with numbers, and at that point, you may as well be trying to get the screen name you really want on AOL or any MMO game.  After all, without the linguistically tenacious, the world would have been denied such clever tags such as “L3GOLAS” and “5KELETOR.”

This morning I saw a car that whipped out in front of me haphazardly that had a vanity plate that read “BL355D.”  It took me a long longer than it probably should have to decipher it, because initially I saw the “BL” and I figured it was just another poorly veiled black-power vanity plate that passes through the ironic double-standard of what’s allowed in the state of Georgia.  But then it finally dawned on me that it was a variant of the word “BLESSED.”

Oh, another “I’M RELIGIOUS PRAISE THE LORD” plate, I get it now.  Religious themed plates are probably the second-most frequently seen vanity plates I see on the roads which are often ironic (or is it?) consider the people driving these cars are often times the most despicable drivers I ever witness.

But anyway, I got to thinking – just how much failure did the driver of BL355D have to endure before they finally managed to squeeze through the window with “BL355D?”  There are two possibilities in this instance – absolutely every single capable instance of “BLESSED” was taken, resulting in this driver having to swallow his linguistic standards and omit one of the E’s, and go back to the drawing board; which by the way are a lot:

And there are probably a few more than that, even before we I have to start pulling out an E from either side.  Regardless, there is still a possibility, given the sheer number of Jesus-fearing fake-pious religious zealots there are in Georgia, that all of these could very well be taken.

Imagine how much it had to have sucked to have been trying to get this vanity plate?  If they did it online, they had to keep typing in a different variant, until it finally came back with a green light that it was available.  But imagine if they weren’t trying online, but at the actual tag office?  Sitting at a desk with some miserable government schlub, having them pecking in random variants of BLESSED until finally BL355D was acceptable.  And it could have been even worse if the driver had applied in the old fashioned pen and paper applications, and actually wrote with their own hand “BL355D.”

Or, we have the second possibility, that the driver of BL355D is just a fucking idiot.

I think we’re going to have to assume the latter here.