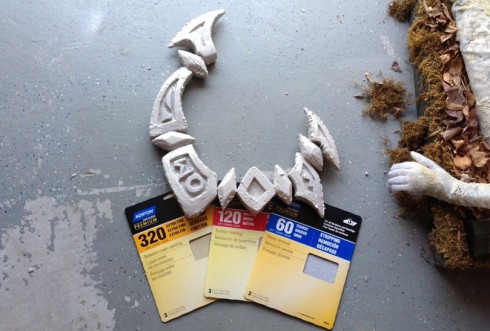 Today, we dive into the wonderful adventures of sanding things that have been Shell Shocked. I would also like to point out that if you could hear me saying that phrase, it would be dripping in sarcasm and with facetiousness, because it is fact that sanding things, especially with complex curves and intricate patterns, absolutely blows.

But it is also an integral part of the construction process, and as much as I’d like to avoid it, it really cannot be. At least not without having an end product that I would probably classify as sub-standard.

So, due to a lot of the complex nature of the design of the staff, I knew that I would be a whole lot of hand sanding, to get into the little cracks and crevices of some of the parts of the crown. And when I hand sand things, I like to do it in parts, as in using a very high-grit paper to really smooth things down, and then gradually working down from 60 grade to 320 grade. I’ll confess that I grew so tired of sanding, that I eventually skipped using 120 grade altogether, except in troublesome spots that refused to smooth down. 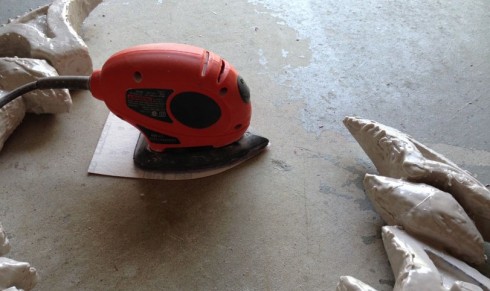 I’ll also confess that it took all of above three minutes of hand sanding to realize just how much hell I was going to go through if I continued the course, so I proceeded to whip out the old mouse sander, and equipped it with some 80 grade sandpaper that clearly fits like a glove on the mouse.

To my credit though, it’s not like I could really use the mouse everywhere. I only used it on very large pieces, and areas where using a mouse was more appropriate and capable.

But in yet another confession, after endless hours of sanding, you might become amazed at how rational using the mouse in a spot that seemed irrational to use a mouse a few hours ago becomes. Seriously, no amount of grits, files or sanding techniques gets shit done as fast as a power tool does. 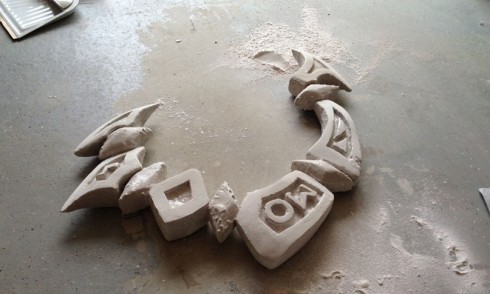 An in-progress shot. Hopefully, you’ll notice that a lot of the blob and goopiness of the Shell Shock has been smoothed down substantially on the edges of some of the pieces, and to show a little bit of contrast, the spacer shapes (the narrow diamond ones) are unsanded in these pictures, since the mouse wasn’t really capable (yet) of being able to sand those. 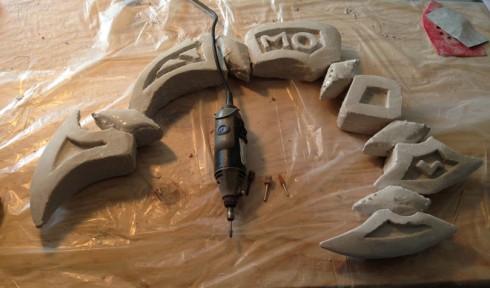 Once the painstaking sanding part was completed, there was still the matter of some of the patterns and the design aspects that needed to have some touching up to do. And since it’s nigh impossible to get sandpaper or a detailing file into certain parts or angles of it, I had to relegate to very careful use of a Dremel with the cone-shaped detailing bit (2nd, right of Dremel) to get into some spaces and do some shaving here and there. 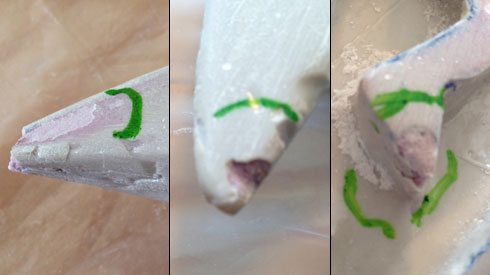 I would have said that if I could get through the Shell Shocking and sanding process without any fuck-ups, then I would deserve a million dollars, no questions asked. That’s how difficult this process is, at least for an amateur like me. Mistakes were inevitable, and it was only a matter of time before a rushed movement here, an ill-advised pull there, and shit would come chipping off of my pieces before I knew it. 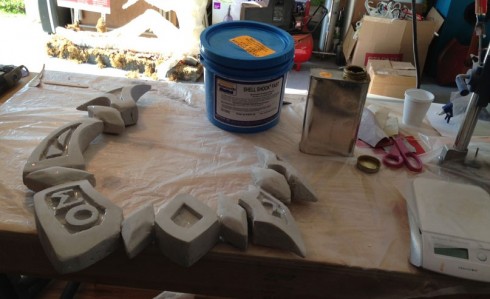 So as much as I had wanted to avoid having to apply more Shell Shock to the crown, it was inevitable that I would have to do some touching up and patch work eventually. And back a step we go, after having taken multiple steps forward. And with that, my work for the day had to cease, due to the necessity of curing time.

But at least I can confidently say at this point that the crown is almost about finished. And once that is done, the rest of the staff should theoretically, hopefully, be slightly less difficult to finish.