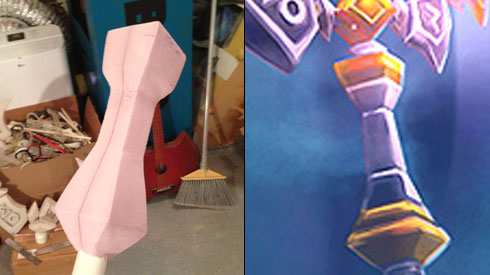 So with the crown of the staff just about finished, it’s time to get to work on making the other components of the staff. At this point, what is left is the, what I’d call the neck, as well as the base of the staff, and their corresponding components.

My plan of execution was just like everything else I’ve made thus far – create the shape in foam and then Shell Shock it. Fortunately for me, these shapes are a little more straight forward, and not nearly as complex, so the sanding process, I don’t anticipate being as big of a bitch. 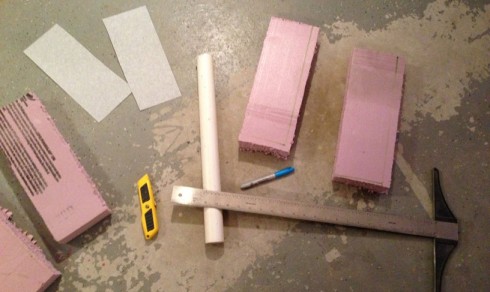 So, based on measurements, the neck as well as the base are roughly around 12″ in height. Diameter-wise, they’re somewhere in between 3-4 inches, but for simplicity sake, my rationale was to stack two layers of insulation foam, giving me four inches to work with. Anything else could be shaved down, and it’s always better to start with too much and shave down, as opposed to not having enough, and having to start over from scratch.

Anyway, the first obstacle was how to get the foam around the pipe itself. BTW, since I hadn’t mentioned this at any point prior, the entire staff is going to built over a 1.25″ diameter PVC pipe. Proportions-wise, it’s slightly inaccurate, since scaling the artwork would have resulted in about a 2″ diameter rod, but let’s face it, we’re dealing with reality here, and that would be a big thick pipe to have to lug around for a while.

So, there’s always the thought to simply drill a hole, and bore out the necessary hole for the pipe to fit into. But my issue with that method is that for starters, I didn’t have a 15″ drill bit that was 1.25″ in diameter to use, and that using the more realistic method of using what I got, and carving out my own hole would undoubtedly result in an uneven hole, and run a very high risk of having the blocks sit crooked on the pipe. Frankly, I do not want that to happen, so I came up with an idea that worked when I made my Mafia Graves gun, so I decided to put it to work in this application.

I’m sure I’m not the first person to ever utilize this kind of method, but for my intents and purposes, I call it “the sanding rod.” 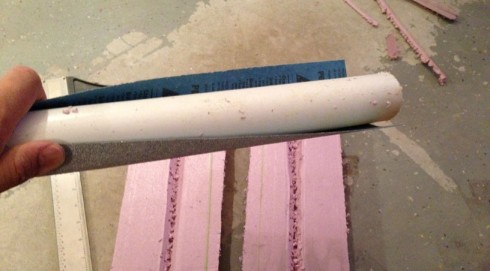 Basically, it’s taking an extra length of the PVC pipe I had from the leftover portion of the pipe, and wrapping sandpaper around it, and dragging it over the foam repeatedly, until it sands out the circular channel necessary to fit over the pipe.

For my needs, I used a brutal 60 grade (very harsh, ripping grit) paper around a piece of the 1.25″ pipe. Also in the picture above, I used a box cutter to create a crude, starting channel for the sanding rod to sit in prior to starting the process. 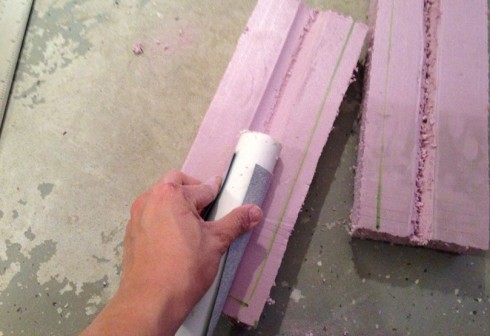 And from here, it’s just a time-consuming and kind of physically strenuous process, of dragging the rod back and forth, and letting the sandpaper do it’s work. As you can see, as the process continues, the starting channel naturally disintegrates away to what will become the necessary half-circle channel I’d need for half of the block around the pipe.

Also, I would highly implore using gloves, on both hands. I didn’t think about it while I was doing it, because frankly, I wasn’t dragging the sandpaper along my own flesh. But simply the pressure of my thumb and forefinger on 60 grade sandpaper for the 45 minutes I spent boring out four blocks has led to some blisters and some ashy-rough skin where they were holding. 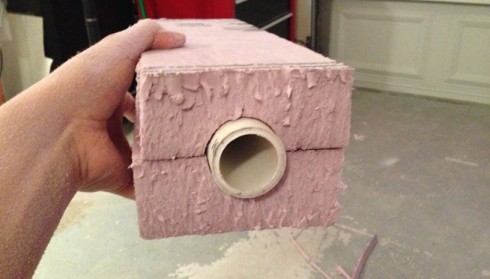 And this is how you know you’ve done it right. Fits like a glove. From here, I can use hot glue, epoxy, or perhaps even screws to secure the block in place on the pipe, before I then begin to shape it into the neck and base of the staff. As far as I’m concerned, this might be the end of the truly physically difficult parts of the entire project now. 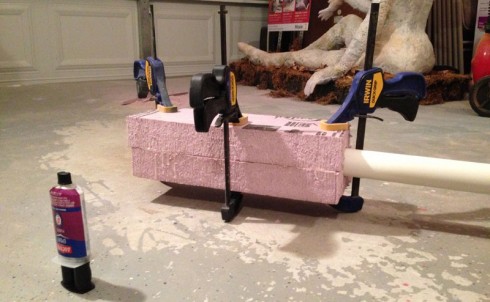 So basically from here, it’s time to adhere the two parts of the block onto the PVC pipe. I would fathom that hot glue would be sufficient, but at the moment, I don’t have access to my large-quantity hot glue gun, so I decided to go with plastic epoxy. I could apply large amounts at a time without having to rush to put the pieces together before putting the clamps down onto them.

The only downside to using epoxy is that it takes marginally more time to dry and harden than hot glue does; that being said, an unfortunate amount of my work day was spent waiting. 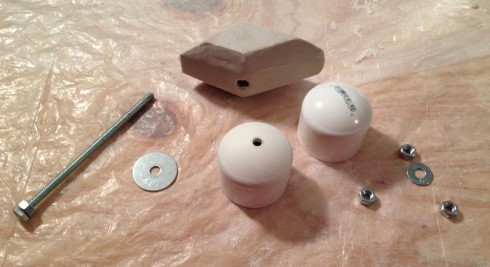 For the first part of the wait, I decided that it was perfect time to address the conflict of when it’s time to mount the crown onto the rest of the staff. My plan was to use a long and sturdy bolt, and have it go through a cap, one more diamond crystal shape, and into the bottom of the crown, into the pre-established screw point that I had made. Above are the materials, as well as the hole that I drilled into both the cap as well as the crystal.

So something I have to consider is that I’ll have to bore out a little bit of a margin in the foam on the top of the block to compensate for the space necessary for this cap. 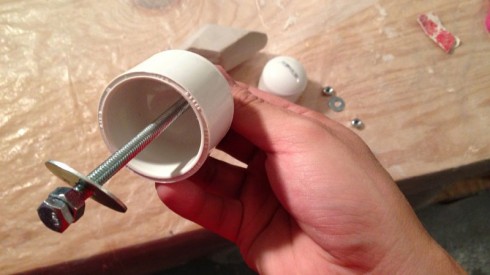 The bolt is a standard zinc-plated 5″ bolt that’s 3/8″ readily available at any Home Depot. There is one nut put onto it to compensate for a little bit of space that I measured incorrectly, and it presses against a washer before going through the hole to give it some balance and support. 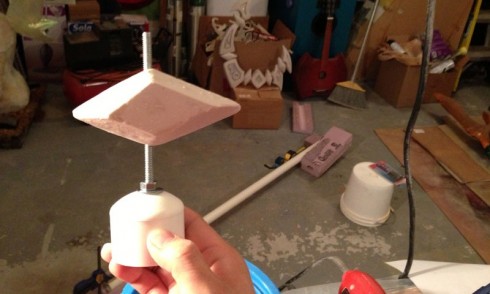 Atop the cap is another smaller washer and another nut to hold it together. From here, it goes through the hole of the diamond, and eventually, it will go into a hole at the base of the staff’s crown. 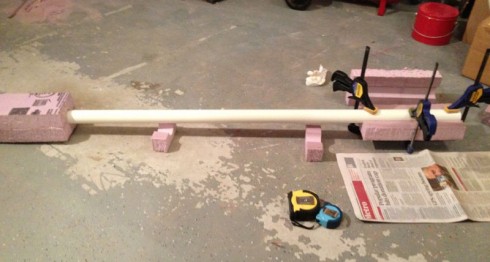 And it was repeating the procedure for the second end. There was more waiting required after this as well. Clamps made applying pressure way easier, so I would recommend them very much. Also, epoxy drips are almost permanent, so use newspaper or a tarp to keep your surfaces safe.

With the blocks adhered to the pipe, it was time to prepare for shaping. As with everything else I do with prop-making, I make scaled-up outline stencils of all necessary shapes. From here, I trace them onto my blocks, and set up lines for cuts and sanding boundaries.

Basically, anything in the blue section does not need to exist. From here, it was a series of using a hacksaw, power sanders, files and hand-sanding to make that happen. 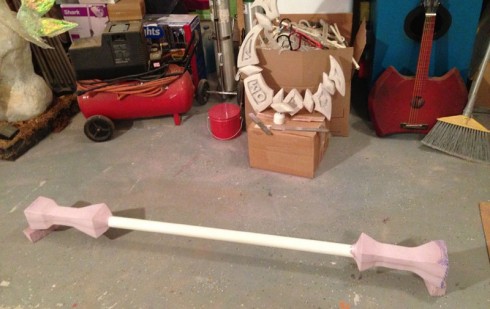 And the neck and the base of the staff are now complete. Almost. As I mentioned, I’ll have to bore some space for caps on the top and the bottom of the staff so that the crown and the jewel at the very bottom of the staff can be installed in the future. From here, I have to use a file to bore out the indentations on the neck and the base of the staff, and then, you guessed it, Shell Shock it. But these are pretty straight forward angles and lines, so I’m optimistic that it won’t be nearly as difficult as everything else was.

Once those parts are done, then all that’s left prior to painting is the creation of the bottom jewel.

Almost done? I sure hope so. I have another prop to make before Dragon*Con after this.