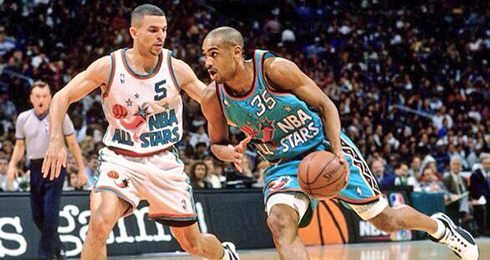 No seriously, I wouldn’t be surprised that behind that cool, calm and collected demeanor that Grant Hill always displays to the public, that there is a demon inside of him.  And that’s not a reference to his fancy white-collar Duke education and that he was also a Blue Devil back in those days, but more of a metaphorical devil of jealousy or resentment – towards the existence of Jason Kidd.

From the day they broke into the NBA in the same year, to just weeks ago when both had declared their retirement after 18 seasons, so often was the case was whenever Grant Hill’s name was mentioned, it wasn’t long afterward that Jason Kidd was brought up.  It’s fun for me to theorize by claiming it, and it’s most certainly realistically not deliberate, but as far as I see it, Jason Kidd has spent his entire career essentially, ruining Grant Hill’s career.

Both were drafted in 1994, and although neither went #1 (that would be the far-less successful careered Glenn Robinson), Jason Kidd was selected before Grant Hill, going #2 to the Dallas Mavericks while the Pistons picked Hill with the #3 pick.  From the onset, Hill probably had to have been disappointed not being the #1 pick, and the lucrative bonuses that come with, but to the credit of Robinson, he was averaging like 35 points a game for Purdue before going pro.

Kidd on the other hand, there was little reason why he should have gone ahead of Hill; after all, Kidd played just two years at California before jumping into the draft, whereas Hill was the highly-pedigreed reigning ACC Player of the Year for “prestigious” Duke, where he had gone a full four years, appearing in the NCAA championship game in three of those years, winning the national championship twice… but it should be noted that the one year where Grant Hill and Duke did not make it to the finals was in 1993, where they lost to who else?  A Jason Kidd-led California Golden Bears squad.

Shit, even before they went pro, Jason Kidd had already cockblocked Grant Hill once.

But anyway back to the crazy conspiracy theory.  Regardless, Grant Hill was touted as the cream of the 1994 draft class despite not being the #1 pick.  He was personable, clean-cut, Duke educated, friendly, and was most importantly a very good basketball player.  This was also the year that Michael Jordan “was retired (for the first time [AKA suspended]),” so everyone and their mother was eager to see whom “the next Jordan” candidates were, and Grant Hill’s name was frequently on the list, due to his ability to kind of do it all like MJ did.

But although Grant Hill had a fantastic rookie season with good all-around game averages in points, rebounds and assists, Jason Kidd captured the imagination of basketball fans everywhere in his own rookie year.  Although Kidd’s scoring wasn’t as prodigious, nor were his rebounds, as he was several inches shorter and a point guard, he was the far better passer, doling out more assists, and often in highlight variety, getting him plenty of television time in the process.  But most notably was a ridiculously torrid second half of the rookie season for Jason Kidd, where he recorded like twenty triple-doubles (paraphrased), and everyone began singing Jason Kidd’s praises.

And it was no more evident how much Jason Kidd’s performance meant to the eyes of the NBA, when they took the pussy way out and declared BOTH Grant Hill and Jason Kidd as co-Rookies of the Year.  If I’m Grant Hill, I’m pretty furious about this snub.  Co-anything in any sport is pretty insulting, and it’s the coward’s way out for those in charge of declaring any sort of superlative.  Hill was the more consistent scorer and rebounder, and although it’s not nearly as expected from his position, was a pretty good passer in his own right.  I can’t imagine that Grant Hill didn’t feel the least bit slighted by anointing someone else as 50% of the same honors at what he might have felt should have been unanimously his.

Throughout the next 17 years afterward, they actually had fairly similar careers, bouncing around to a few other teams as they grew older.  But while they were in their young primes, both appeared in numerous All-Star games, and traded punches in the honors categories over who might have been better, or was having the better the overall career.

But honestly, every single one of those nominal honors can be fairly easily rebuked in an argument:

So back to the point at hand, Jason Kidd pretty much owned Grant Hill throughout their respective careers when it came to achievements and success.  On top of being able to easily counteract every single one of Grant Hill’s superlatives, Jason Kidd was widely the better defender, with his ability to amass steals getting him onto nine different All-NBA defensive first or second teams (not that anything All-NBA matters), and mostly by virtue of his ability to stay off of the disabled list in comparison to Grant Hill, Jason Kidd would end his career with more points, assists, as well as rebounds than the taller, more prolific scoring Hill.

But the most important thing of them all is the simple fact that Jason Kidd won an NBA championship, and Grant Hill never did.  Sure, Hill may have been a champion in college (twice), but ask guys like Patrick Ewing and Hakeem Olajuwon, who were in essentially the same boat, which they championship they’re more proud of, and the one they wish they got; regardless of the theoreticals in this scenario, consider a 7’0 Patrick Ewing dunking on 18-20 year olds in college, and think of which is a more competitive nature.

So if I’m Grant Hill, I can’t imagine how much sucks to have played at the exact time that Jason Kidd did.  Because no matter what Grant Hill accomplished throughout his entire career, it would always end up being overshadowed by something that Jason Kidd did, or would do at some other point.

But the best part to the whole journey of both guys is that Grant Hill couldn’t even declare retirement without Jason Kidd coming in to steal the thunder of the whole situation.  It’s like the ink couldn’t even dry on Grant Hill’s declaration of retirement forms, before Jason Kidd had to come along, and go declare retirement himself.  It’s pretty much 1994 all over again, where Hill can’t even get a moment in the spotlight to himself without having to end up sharing it with Jason Kidd.  Suddenly, there’s all sorts of articles and stories popping up about the parallels in their careers, but frankly none of them are going to be so decisive as this post is.

The bottom line is that Grant Hill could very easily have been a bigger star throughout his entire career, had it not been for the existence of Jason Kidd.  Even if Kidd simply came into the league a year or two earlier or later than Hill did, or if Hill left Duke a little earlier, this would all be a completely different story.  Stories of their connection by virtue of draft year don’t exist, and even if both are excelling at the same time, it’s treated differently had they not entered the NBA at the same time.  But because they did, they’re forever connected, and as long as such circumstances existed, Jason Kidd made sure to always be on top of that little union.

And since I mentioned ink drying, the ink on Jason Kidd’s retirement papers, let alone the sweat moisture on Kidd’s last Knicks jersey probably haven’t even dried yet, before the next chapter of his life began.  Following in the footsteps of countless former NBA players ahead of him, Jason Kidd is set to come back to the NBA next season, but not as a player, but the head coach of the New Jersey Brooklyn Nets.

So the question is now, is Grant Hill going to suddenly become a coach for an NBA team, or is he going to defer the spotlight to his eternal tormentor?

Either way, it looks like Grant Hill has been owned by Jason Kidd yet one more time.  I’d want him dead too, if I were Grant Hill.