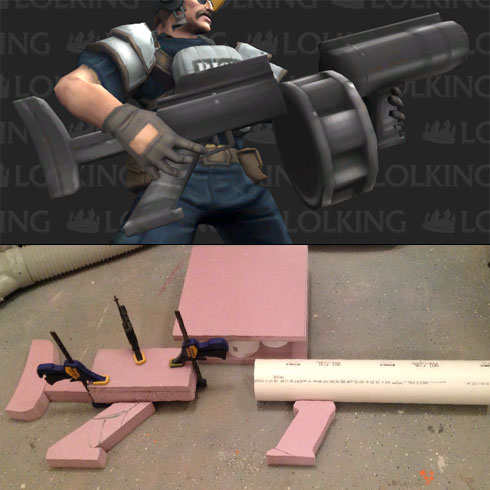 I haven’t yet finished the LeBlanc staff, but it’s because I’m at a stage in the build that requires some help outside of my realm. That being said, time waits for nobody, so in the mean time, it’s time to start on my other project prior to Dragon*Con this year. And this one, is actually for me, since I’m going to dress up as (an Asian) Graves again this year, but this time bust out a Riot Graves skin.

But in order to be Riot Graves, that means I would most certainly need to make the Riot Graves gun. The good news for me is that compared to the Mafia Graves’ Thompson-style gun, Riot Graves’ gun is theoretically easier to construct. Not to mention the fact that it’s almost exclusively all one color, it should eliminate a lot of complexities of trying to mimic wood grain, and add gold accents here and there.

For the most part, I’m going to be building the Riot Graves gun almost identically to how I built the Mafia Graves gun – out of insulation foam, Shell Shock, and PVC piping. Except this time, I feel that I have a better understanding of how to put things together now, and how all the chemicals work, and just generally more experience than I did prior, so I think I might be able to make this one a little bit more refined than last year’s. 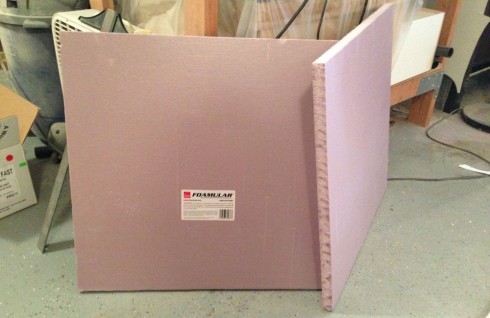 First off, I almost jumped for joy when I saw these insulation foam sheets sold at Home Depot today. Specifically, 2′ x 2′ sized, and not a gigantic, drywall-sized sheet of insulation foam that I’d have to cut into segments in the parking lot in order to take home. But I had a need for 1″ thick insulation foam for the clip of the gun, and these things were precisely what I was looking for.

Now one thing I didn’t really convey very well in my attempt to chronicle the LeBlanc staff construction was how much work goes into preparing and planning the physical shapes that make up my projects. Above is an example of how I plot out my general shapes that I’ll cut and if I’m going to need to make modifications or not.

Firstly, I blow up the image to match something resembling an actual human height. From there, I get a general idea of the scaled size of the actual gun in proportion with an actual human being. The outlines are done in Illustrator, and then I typically clean them up or make any alterations to the shape before printing out stencils that I’d trace onto the foam blocks.

In the case of Riot Graves’ gun, the white gun outline is a more approximate size of what it should be. But since I live in reality, there’s not much chance that I was going to be able to efficiently hold a 65″ long gun with a barrel that is eight inches in diameter. That being said, the gun that I will be building is somewhat scaled down, and some proportions distorted in order for one, to be realistically mobile, but also something that’s not going to weigh a lot.

Although I would dare someone to accuse me of copping out; I’m pretty sure the expected weight of the gun in the end would still be easily capable of clubbing someone to death. 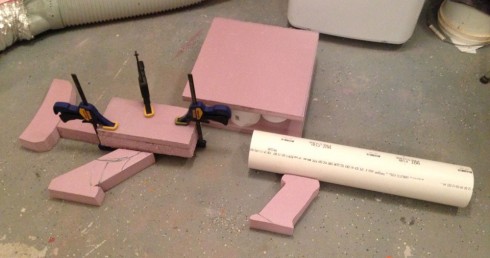 But yeah, it’s pretty much the same start as it was for the Mafia Graves gun. Honestly, I’m not sure how many updates I’ll have to do for this gun, that would be any different than how I did it a year ago. But the shapes are inherently more simple for this gun, and this time I don’t have the apprehension or fear of mistakes that I did a year ago, so my confidence in this project is substantially higher.

The basic shapes are cut out, so eventually I’ll get to coating them all in Shell Shock. And then there will be a lot of sanding and smoothing, before I put things together. But this time, I’m going to preemptively plan my screw holes and spaces for plates and contact points of adhesion in advance, which I think will lead to a cleaner, more refined build that might not be very noticeable to anyone but me.

The clip is probably going to be the most complex part of this build, but if everything goes right, it’s probably going to be the most impressive part of it. The PVC pipe pictured will eventually be shortened about seven inches, bringing it to a width of 17″. Although my measurements (in green) claim to be around 41.5″ in total length, I’m pretty sure it’s going to be a little bit longer than that, unless I chop it off the barrel. The width of the clip looks like it’s going to be wider than I had planned.

But there we have it, the start of the Graves Gun build. Unlike Mafia Graves, I’ll actually have to make some actual costume components, instead of every single thing being store purchase-able, but it’s nothing that I don’t think I can’t handle.