Yeah, neither have I.

Like so many things out there, it gets to a point where you have to believe that there is nobody who is going to do it right the way you want it, so it falls on your own shoulders to make things right.

I’m not sure where it occurred, but I’ve been craving salads lately, which is slightly uncharacteristic for a guy like me. Typically, the only salads that I voluntarily eat are the ones that come with my entree at particular restaurants. But as of late, because of this craving, I’ve been deliberately ordering side salads with my dinners when I go out to eat, and each time, I’m left feeling unsatisfied, and that I’ve wasted an extra few bucks.

So, I decided that if I was going to extinguish this craving for salads, that I would have to do it myself.

To the credit of all the salads that I’ve eaten lately, they’ve all had an ingredient or three that I do agree with, but all fall short to the grand spectrum of my expectations. That being said, I set out to make the ultimate salad that had everything I find ideal in a salad, with no shortcomings.

The funny thing? I actually forgot one ingredient that I remembered after the fact. But since I had gone too far, I didn’t feel like putting everything on hold so that I could hard boil some eggs. So although some protein goes missing, at least my cholesterol is protected somewhat. 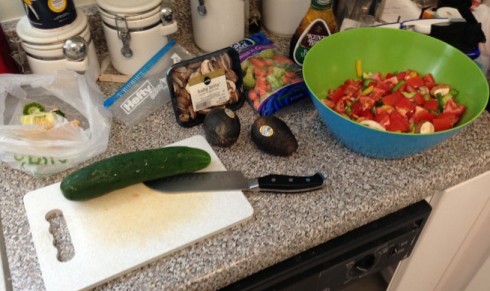 The procedure is quite simple. First, chop up all the vegetables that actually need to be chopped up. The peppers, avocados, cucumber, onion, etc. And throw it into a bowl or some sort of container. Little did I realize that the bowl I had was filling up precariously fast. 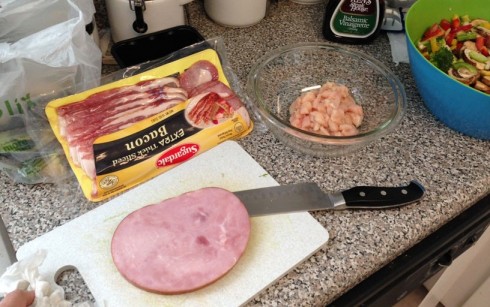 And since any sort of salad labeled “ultimate” can’t really be ultimate without proteins, I thought about what kind of protein I typically enjoy in any salads that I have. Usually, it’s chicken, ham, or bacon. So I thought, why not all three?

So I chopped them all up into small pieces not meant to overpower any vegetables as tasty meats tend to do, and threw them into a skillet all at the same time. 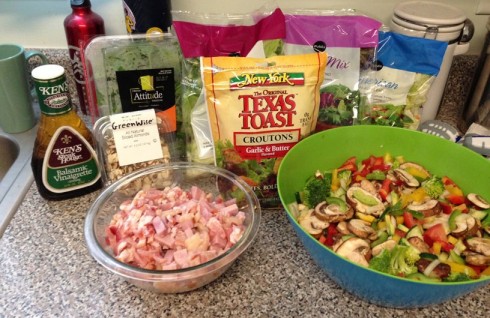 As you can see here, my salad bowl is pretty much full at this point, and I hadn’t even begun to add any of the leafy greens, and there were still plenty of ingredients that still haven’t gone into it yet. This was going to be an issue. 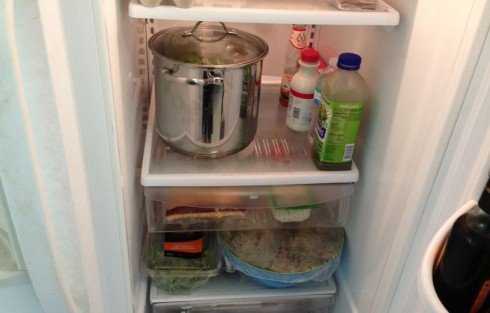 So, with the next largest thing I had available to me, was a 30 quart stock pot, so there we have it. I broke down the portions into two segments.

After the proteins were cooked, I added them to the salad, and gave it a good mixing. And into the fridge they went for some cooldown time, because my preference is that salads are best served chilled.

Also note the large container of spinach that went almost completely unused, due to the fact that the ultimate salad was getting a little too ultimate for the containers I had available to me. 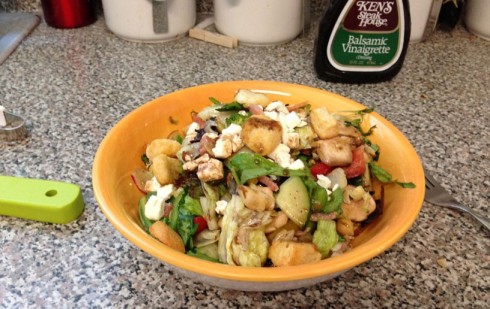 20-25 minutes later, and voila, I have completed an ultimate salad. Adding a few croutons, preference of cheese, and a little balsamic vinaigrette, and we have this delicious, flavorful salad that all salads should really look up to for guidance. With, or without dressing, it still has a good bit of flavor on its own, due to the magnitude of other flavors all intermingled together.

And now I’ve got like 25 servings of it, and obviously it’s not going to keep over a day or two, so it looks like I’ll be putting my salad cravings to the test over the next few meals.

But it’s going to be difficult, because after two bowls of this salad, I’m full.