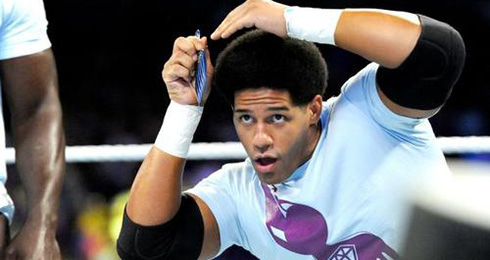 Earlier in the week, Darren Young, a current active WWE wrestler, came out of the closet and announced that he is gay, when he was approached by a meddling paparazzo at an airport.  Admittedly, it’s funny to watch how the paparazzo probably thought he could corner Young into an uncomfortable situation with a loaded question, only for this admission to happen, and completely turn the tables on him.

But the point remains, it’s somewhat notable that a WWE wrestler would come out of the closet while still currently active and fairly regularly used on television, considering that just about every wrestler or other professional athlete who also admit to being gay, all waited until their careers were already over and in the past before doing so.

What’s cool to see is however, is the general tone of the response to Young’s revelation, which has been mostly positive.  It’s a good thing in my opinion, because sexual orientation is something that doesn’t necessarily matter in the workplace, even in one like a homoerotic setting like professional wrestling.  I can’t imagine that every single performer in the company is thrilled for Darren Young’s confession, but at the same time, I think everyone has matured just a little bit to understand that it might be best if they kept their prejudices quiet, especially if nobody does anything to provoke them.

My kneejerk reaction to the whole situation, and I mean this in the most supportive way, was “who cares?”  Sometimes, I wonder if that’s something that gay people want to hear, because when the day is over, people who don’t care about another’s sexual orientation, are the least likely to make any deal about it at all.  Frankly, I don’t really care about sexual orientation, and think it’s silly that there actually are so many people are so staunchly opposed to it that they actually let it consume their own mental and time capacities.

I like to think that today’s professional wrestlers are also with the times of today, and understand and accept that homosexuals actually exist.  When the day is over, every wrestler is in the business because they want to make money and/or become famous.  But it’s an industry where one person can’t do it on their own; they will always need their opponents to help them look like superstars.  And when money and fame are ultimately on the line, what does it matter if their opponent happens to be gay?  Wrestlers will always want to have the guy that’s going to help them make the most money as they can, and ultimately so do they.

What I’m hoping does not happen as a result of this whole story is that Darren Young gets pushed, or buried.  I just want the status quo to remain as it was prior to Young’s emergence from the closet, but anything else in either direction is a very risky move by the WWE.  It’s admirable what Young did, but to be perfectly honest, I don’t think he’s that strong of a performer, worthy of a genuine push, nor does he deserve to become a jobber either.  As part of the Prime Time Players tag team, I think his partner Titus O’Neal is both the stronger worker, as well as guy with more charisma and mic skills.

Bottom line is good for Darren Young for letting himself free and letting the world know he’s gay.  That’s fine, I accept it, but I don’t really care.  Get back in the ring and work on your craft, so that if/when you ever get pushed, it’s because you’ve earned it, and not because of any publicity that’s come your way as a result of this revelation.