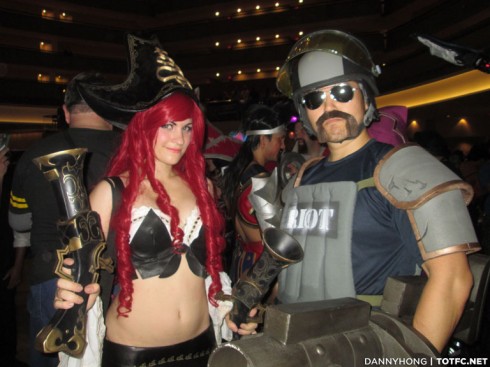 But of course I had a secondary camera I had on me while taking part of the League of Legends shooting!

The good news is that instead of my busted old Sony Cybershot I had for a secondary camera, I had something that was able to at least take shots in focus.  However, it’s still a plain point-and-shoot, so the flash tends to eat things alive, but at least the subjects were in focus.

Much like last year, since there’s a lot of waiting and standing around, while rangling LoL costumers and taking turns with who’s shooting with the marvelous Joseph Chi Lin, I figure there’s plenty of time to take random candid shots of my friends as well as other LoL costumers.  And sweet merciful jesus were there a lot of LoL costumers hanging around this year.

Among them was the girl I deemed the greatest Miss Fortune costumer ever, Vensy, whom was also the Wicked Lulu in the group.  But overall, everyone looked fantastic, and I had a great time hanging with fellow League nerds, and I look forward to doing it again next year.

Maybe then I won’t have something with such a gigantic heavy gun.