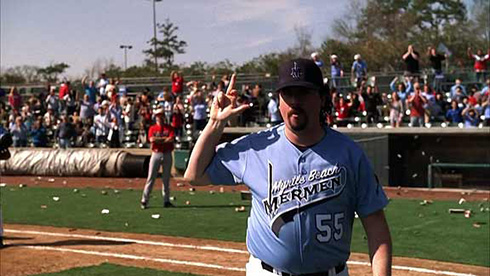 I kind of feel bad that the most emotion evoked from me from watching baseball this year has come from watching Eastbound & Down, when Kenny Powers had a monologue about feeding off the hate of visiting rednecks and the failure of his Russian rival, and then there was this epic montage of him coming out of the Myrtle Beach bullpen, flicking off everyone in the crowd, telling off the Russian off, and then striking out the batter on three pitches to save the game and win back the love and admiration of all his teammates.

I rewound it and watched it three times, it was that awesome.

At the time I’m writing this, the Braves are first place in the National League outright, and are almost to the point where they’re clinched into the playoffs.  They are on pace to have their mathematically best season in LITRALLY a decade, and this is the most home run-riffic, explosive, exciting offense in quite some time.

That being said, I’ve been to less than ten Braves games this season, and it’s safe to say that I’ve listened to more games on the radio than I’ve actually watched on television.  Part of it has to do with the fact that DISH Network is a bunch of petty jews who for whatever reason have an annual beef with FOX, to where some tertiary network gets the shaft in the form of being unavailable to the customers, with this year being FOX Sports South AKA just about every single weekend Braves game.  Part of it had to do with all the time spent in the garage working on costume stuff for Comic and Dragon cons this summer consuming a lot of my daily evening free time which could have been spent watching the Braves.

But then there’s the part of me that’s generally grown apathetic towards baseball in general.  It’s not to say that I dislike baseball now, because that couldn’t possibly be further from the truth, but the reality is that I am prioritizing baseball lower and lower with each passing year it seems.

I mean, this has been a slide that started as early as 2011 at this point, where I really didn’t care that the Braves choked out of the playoff picture on the final day of the season, but throughout the 2013 season, I’ve been to fewer home games than ever, resigned as a staff writer for Talking Chop, only really cared about bobbleheads, and hardly paid attention to the Braves even when I have the chance.  Often times at the first glance of the Braves losing a game, I don’t think twice to going to go play League of Legends.  I think I’ve missed out on like four of the numerous comebacks the Braves have mounted this year.

The good thing is what hasn’t changed though – baseball is still amongst my favorite things to do with friends.  In spite of my general apathy towards watching baseball by myself, I still find it a tremendously enjoyable activity with good company.  Whether it’s heckling centerfielders with statistical jargon in Tampa, traversing through upstate New York watching has-beens and wash-outs still clinging to the dream, or staying out at 1 a.m. to watch a game creep into 15 innings in the rain, with good company, baseball is still the best.