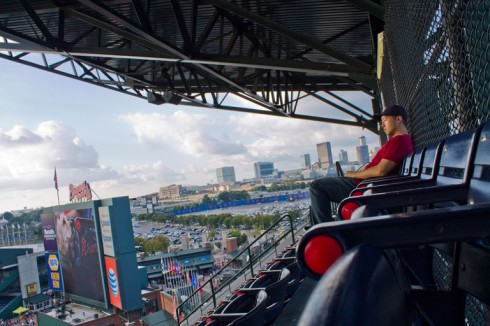 I asked the wheelchair-bound man if I would be bothering him if I took some pictures while kneeling beside him.  He said that it wouldn’t be a problem at all.  I knelt down and took two quick snaps of Freddie Freeman fouling off pitches, and then an usher was on my ass like it was delivered from the sky like in Sharknado.  Telling me I couldn’t take pictures there, I couldn’t stand here, there, and that I needed a ticket.  I could have questioned him, but it was pretty clear from the onset that black-man-on-a-power-trip was going on, so it wouldn’t have gotten me anywhere.  I simply said okay, and left.

Earlier in the evening, and I use the term evening loosely, considering it was 5:15, almost a full two hours prior to the first pitch, sunny and beautiful, and with less than 300 people in the entire stadium.  I politely asked the usher in 103 if I could go down to the bottom of the section to snap a couple of pictures of some players taking batting practice.

“You can go down starting in section 117.”  AKA way the fuck far from where I actually wanted to take some pictures.  So I asked her again if I couldn’t take pictures from her section, to which she simply responded, NO.

The disturbing thing about both of these instances, as well as several other smaller instances is that these all occurred at Turner Field, my home field park, and the park I lay claim as amongst the better barks in Major League Baseball.  What makes matters worse is that these places where I was innocuously wishing to snap a couple of photographs from, are places that I’d shot from before several times, in prior years.

The only difference with those days and yesterday is that the Braves are now really good again.  Suddenly with team success, comes a level of inflexibility towards the fan experience, which I don’t really think is a good thing at all, and not just because they’re so willing to cockblock my picture-taking aspirations.

I really fell in love with going to Turner Field back in 2007.  It was a year removed from the end of “the streak,” where the Braves had won the division every single year between 1991-2005.  With the team no longer in the upper echelon of the baseball hierarchy, it reflected in the ballpark experience, starting around 2007.  Prices relaxed to more reasonable costs, the parking lots, official and private began easing up on their rates to entice people to still park there, and the park itself was a world of civil employees, who were amicable and willing to stop and chat amidst their people-monitoring duties.  I went to like 20 games that year, and despite the fact that the Braves missed the playoffs again, they still fielded a fairly competitive team, and there were some great games watched then.

The following year, the Braves were even worse.  With a roster full of crap players, with their only good ones all getting hurt, or traded away, the Braves had their worst season in well over 15 years.  But as a fan, it was one of the most gratifying years ever for me, because I went to the ballpark like 40 times, as it was an economical and relaxing thing to do on a regular basis.  Sure, the Braves lost more games than they won that year, but it really didn’t matter, because the park was a place where I could meet up with acquaintances, and it was such a reasonable cost then, I managed to get a large group of my actual friends, that don’t like sports, to go a ballgame because it was dollar hot dog night, where we collectively pounded away like 30 hot dogs.

Dollar hot dog night is something that bad teams have to do, to get people to the park.

Back to the present though, I’m happy as a Braves fan, that the Braves are a very good team again, but as a fan of going to the ballpark to enjoy the experience of being at the ballpark for a game, I’m actually quite disappointed with Turner Field for the hypocritical way they’re operating now, as a result of said success.  On a corporate, procedure- and results-oriented mentality, I understand that they’re really not doing any wrong by not showing any flexibility or leniency towards ticketing policies, but as human beings, they’re often times missing the point.

If it were a packed house during the playoffs, I wouldn’t ask to go sit in a $130 seat four rows behind home plate, while my ticket’s face value is just $35, so I could take pictures while standing in front of Jimmy Carter and Evander Holyfield.  All I’m asking is to take a few pictures here and there at careful and considerate locations during a game where nobody is at because it’s a Thursday night below 70 degrees with a more appealing college football game five miles away.  And when they don’t acquiesce to the circumstances, it puts a sour taste in my mouth.

Personally, part of the problem for me is that these situations make me compare Turner Field to the numerous other MLB parks I’ve been to.  Even in Fenway Park, the year the Red Sox won the World Series, did nobody have any problem with a fan of the opposing team walking around and taking pictures.  Notoriously popular ballparks like Busch Stadium and Chicago’s Wrigley Field were staffed with jovial and well-educated employees who were willing to let a traveler snap some shots, or turn the other cheek with a wink and a smile while I jetted off into way more expensive seats to take some pictures for two minutes.  Some of these teams were really good at those times, and sometimes they weren’t, but the fact of the matter is that it was irrelevant to them.

With the success of the Braves, has unfortunately comes a whole lot of lockdown on what made Turner Field such an appealing place to me in years in which they weren’t so successful.  Ticket costs have skyrocketed, all the parking lots both official and private gauge almost criminally, and the with a few exceptions, the people that work the park operations just simply don’t get it.

Admittedly, part of my failing attendance to home games is apathy, but I was really looking forward to the game I went to last night.  Getting admonished for not necessarily doing unreasonable things really reminds me of what Turner Field is becoming in line with the success of the team, and it’s making me not really want to go as often in the future, unless I have good reason, or friends in tow.