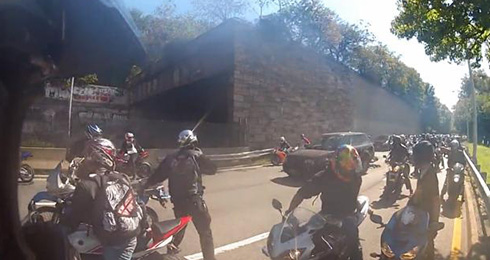 I know it’s all over the news lately, but I just felt like saying a little something about the whole New York bikers story that provoked an altercation that led to a person getting run over and paralyzed and a man beaten viciously in front of wife and daughter.

The bikers in question, in every way, shape and form, are fucked.  The only injustice that can come out of this whole situation is if the driver of the Range Rover is charged with absolutely anything, or has to pay a single dime.

The guy that got run over and is now in a coma and likely paralyzed for life?  Sucks to be him.  The funniest thing about the whole story now is how the same bikers who propagated this entire episode, is obviously the guilty party, and were dumb enough to video document all of their guilty discretions, are now trying to paint Steven Hawking and themselves as victims of this whole situation and are soliciting for donations.

Personally, if it’s not obvious, I am 100% on the side of the driver of the Range Rover.  These bikers were driving around like assholes, ruining the reputation of responsible bikers, and very blatantly attempting to troll and intimidate the cars on the road.  When put into a situation where his family’s safety was put into question, he did what I would do, and probably what most other men with a wife and kid(s) would do – he fucking punched it, regardless of what was in front of him.

I mean really, what else was he supposed to do?  Let these thugs smash up his car and slash his tires and not do anything about it?  How was he supposed to know that they “just” wanted to vandalize his ride just to scare him and his family?  As far as he was concerned, once they desecrated his car, they were coming after him and his family, so he did what he had to do.  From what I can tell, the general consensus feels similarly to me – no remorse for any of the bikers that either had their bikes or themselves run over by this guy, or anyone else in their crew for whatever reason.

Regardless, it’ll be interesting to see how this whole thing pans out in the end.  I’m guessing not enough justice will be served, some sort of motorcycle laws will arise and be fervently fought, the paralyzed guy will be a target or ridicule by the internet but he will conveniently be comatose for most of it, and unfortunately, the driver of the Range Rover is going to have to live his life with a little bit of fear in the back of his head that someone might be coming for him for some unjust retribution because he did nothing but try and protect his family.

That’s the worst part of this whole story – it only ends with miserable people.  This was completely avoidable, but a bunch of retard bikers had to act hard, and everyone suffers.