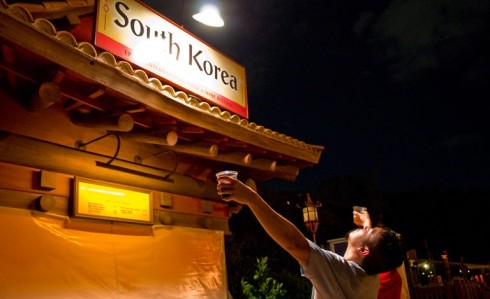 My Disney vacation was a great time.  I’m sure I’ll elaborate on several aspects of it in future posts as I comb through the litany of pictures taken during the trip, but I just wanted to artificially inflate my own brog post count by posting something fluffy and inconsequential, not to mention that I’ve got a little bit of downtime at work, and it seems like a good idea at the time.

I can’t really say that there was anything bad about the trip, so by default it means that it was a very good vacation as a whole.  Staying on Disney property was interesting and a somewhat educational experience, at the Wilderness Lodge, and I loved the idea of being privy to Magic Hours as resort guests, even if the one time we were at Epcot during a Magic Hour, we hardly got much privilege out of it, but it means something to look forward to in future years.

Speaking of Epcot, the Food and Wine Festival was as fantastic this year as it was last year.  It’s hard to really identify what I thought was the best thing eaten, considering I ate pretty much something from every single country, and drank very profusely, making me want to abstain from booze for at least the next week and some change.  But there were a lot of fantastic plates tried.  One thing that stands out as a very memorable consumable for me, was this grapefruit beer from one of the German brewmaster’s collection, as I found it to be pretty much the best drink on the planet, and made me want it over and over again, and turned into one of the few tragic moments of the entire trip, when I arrived to the booth just as it was closing, and unable to acquire more.  However, the biggest tragedy of the entire event would have to be the pitiful display from the South Korea booth, whose interpretation of a Korean-spiced pork lettuce wrap ended up being this pathetic piece of romaine lettuce with white-folk pulled pork and some overly-sweetened, not-spicy kimchee.  Poor form, motherland.

Universal’s Halloween Horror Nights was fun and all, but man was it crowded.  Purchasing the FastPass is pretty much the biggest no-brainer in the world, but the fact that it apparently only works once per attraction was a massive buzzkill.  The clusterfuck that was the security checkpoint at the start of the event was a massive turn off for me as well, and kind of a sad state of affairs that an 18+ event requires such extreme measures.  But once inside the doors, the haunted houses, I actually liked more this year than last.  The “house specials” were weak, but I enjoyed the Resident Evil house, mostly by virtue of the hot Jill Valentine they had inside of it, but the Cabin in the Woods house was the clear-cut best one of them all.

I actually took a break on one of the days in which we were down in Florida to essentially do nothing but relax by the pool.  After my declaration for needing a vacation, I thought it would be a good idea to try and recreate some of the magic of relaxation that I had in Mexico a year ago at the resort, and was somewhat successful at it, even if I had to pay exorbitant amounts for my own drinks unfortunately.  In the process, I both sunburned the ever-living shit out of my chest, since I failed to put any sunscreen on myself like a retard, and tried my hand at feebly spinning some game with a complete stranger, which went strangely, okay.  The girl didn’t run away screaming, and we actually had some pleasant conversation, so I actually felt good about myself in that regard.  But the sunburn lasts longer, and man does it suck right now.

Catching up with an old friend of mine that now resides in Kissimmee was also a very rewarding part of my trip.  In some regards it makes me feel old(er), since he’s now got a wife and two kids, but at the same time, I was just really happy to spend some time with a good friend I hadn’t seen in so long.

As I said, I’ll likely be spending some time over the next few days going through photographs I took while in Florida, but for all intents and purposes, it’s back to a somewhat normal brogging procedure starting next week, because I don’t want to do anything this weekend except be lazy, relax, maybe watch some baseball, maybe some football, and play League.  But the long story short is that the vacation was fun, and much love and thanks to all the people who were a part of it, because it wouldn’t likely have been good without the company.