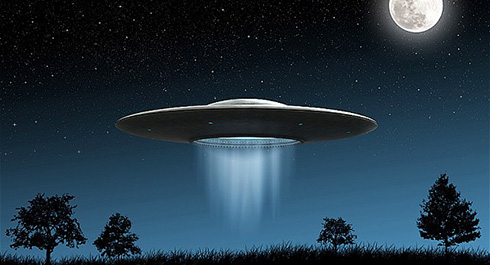 A few days ago, I was driving past the airport.  It was night time, and the sky was filled with the lights of airplanes that were either descending into Atlanta Hartsfield, or circling and awaiting their turn to begin touchdown of their aircraft.  Seeing all these blinking lights cutting through the dark night sky made me think about my childhood, and how when I was a kid, such a sight would have been more than sufficient at giving me nightmares for a week.

When I was like 9-10 years old, I remember watching television, and seeing a commercial for either Unsolved Mysteries or Sightings; that part I can’t recollect specifically, but the advertised episode was one that of UFOs and alien abductions.  I vaguely recall the commercial having all sorts of amateur footage of people filming lights in the sky, unorthodox flight patterns of lights floating around in the sky, lots of people gasping and exclaiming their surprise at seeing clearly an alien spacecraft, and the kind of phenomenon that would be more ridiculed and laughed at today, than it would have back in like 1991.

That commercial itself didn’t necessarily scare me as much as it kind of fascinated me, but that night, I had the mother of nightmares involving invading UFOs and alien abductions from little green creatures that were closer to Mars Attacks! than Aliens, and my life was not the same for about the next two years.

After that nightmare, I had this fear of UFOs and the aliens that rode aboard them that wanted nothing more than to snatch me off in the middle of the night and take me into space for god knows what purpose.  The result of such naïve fear was that after the sun set and the night sky engulfed the world, I simply refused to look at the sky.  ALL blinking lights in the sky were unquestionably alien space ships at night, and if I didn’t see them, they didn’t exist, and if they didn’t exist, they couldn’t swoop down and abduct me.

I shit you not, this is how I thought when I was a kid.

Obviously, not looking at the sky once night fell was a very tall order on the grand scheme of things, as, as much it would be nice to simply not do anything once night fell, that’s just not always possible.  Especially in the winter time, when the sun set at like 5:30 pm, and there were still plenty of things to accomplish in the evening that required going outside like going to Tae Kwon Do classes, piano lessons, or running errands with mom.  Every single one of those endeavors resulted in me sitting down in the car and refusing to look up out the windows with fear of seeing any sort of blinking lights in the sky.

Occasionally, in my peripheral vision, I would catch a glimpse of blinking lights in the sky, and internally, I would be pretty much having a panic attack.  The UFO ship clearly knows that I saw it, and the only way to silence me would be to abduct me.

Where I was living at the time, there was a tower of some sort not far from the house.  I’m not sure if it was just a power line, or transmitter of some sort, but whatever it was, it had a stationery blinking light on top of it.  This fucking thing, even though I knew what it was, was still the source of lots of inadvertent anxiety during those years, because I more than I’d liked to have had, caught a glimpse of its blinking light in the middle of the night.

Halloween was pretty much the worst holiday in the world during this period of time, because it pretty much meant spending 3-4 hours outside in the middle of the night.  Seriously, if it were up to me, I wouldn’t have done it at all, but I had neighborhood friends, and in spite of my fears, Halloween candy was always a good thing to have.  So under the belief that in the guise of a costume and in the company of friends, I would be safe from the UFOs, I went out trick or treating regardless.  Although, I remember letting my guard down for a moment one year, and seeing a truly scurry looking UFO in the sky that made me clench of cringe internally while trying to remain excited about trick or treating.

I lucked out the next year, because I got sick during Halloween.  So instead of going out into the scary UFO filled sky night, I stayed home with A Link to the Past, and had no risk of seeing or being abducted by UFOs.

Obviously, this is something that I eventually grew out of, as I suppose I began to wonder why I was so scurred of UFOs in the first place.  By the time I was in the sixth grade is when the X-Files began airing, and the first episodes revolved around UFOs and the abduction of Mulder’s sister.  Instead of being frightened by this new show that was clearly meant to test my courage, I confronted it head on, and actually became a fan of the show until FOX fucked the scheduling and subsequently the show like a Thai hooker.

Either way, sometimes it’s amusing to see something that reminds me of my childhood, and to take a look back and reminisce about it, even if it makes me sound like a gigantic sissy.  But there really was a period in my formative years where I simply was afraid to look at the sky at night.  Funny how things work out, because I certainly enjoy looking up at a clear night sky these days, now that I’m all old and shit.

I wonder if there are kids today that were like how I was, and are afraid of blinking lights and flying things in the middle of the night?  Because as often as I travel, I’ve probably been on an airplane traveling in the night, that some kid like me had inadvertently glimpsed at, and thought was a UFO full of aliens that want to abduct them.