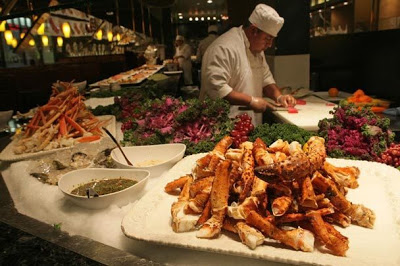 Long story short: Chinese man buys a refundable first-class ticket from Eastern China Airlines and uses said ticket to eat at the VIP lounge at the airport for almost an entire year by virtue of rebooking his ticket on every visit, over 300 times and returning later and getting back into the lounge to eat some more.

Honestly, this is pretty incredible.  Evil, but incredible nonetheless.  Of course it had to come out of China, too.  Where they’ve got people practically living in their knockoff IKEAs, using rail stations as makeshift commodes, and some people who have figured out how to live in the sewers; why not be where a dining exploit could be found too?  And in the end, it’s hard to blame the guy, because nowhere in the ticket’s literature did it say that his first class ticket entitled him to exclusively one access into the airport’s VIP lounge.  In the end, he outsmarted the airlines, and they were lucky that he was the only one clever enough to realize the loophole in their system.

It’s a win on so many levels too.  Sure, we don’t really know how much resources went into routine travel to the airport, and sure there’s always the aggravation of having to go through security checkpoints and possibly customs, but there was always a freshly prepared meal waiting for him after he bypassed such nuances.  I’m really curious to know the quality of the cuisine at this VIP lounge, if it was really legit gourmet food, or if my expectations are too high being a fat American, and it’s really mediocre stuff.  It really doesn’t matter, because essentially it’s free as long as you’re holding a first class ticket.

The interesting thing about the story is the fact that the airline admit that they technically couldn’t stop him from doing this, because it is something that wasn’t disclosed, but they gloss over whatever tactic they did in order to get him to stop.  “Confronted” is a pretty PC way of saying “intimidated” probably, but even in spite of the moral victory of getting the guy to stop mooching off the airport lounge, he still got every cent of his initial ticket purchase back.

“Owned,” doesn’t even really begin to describe what this guy did to Eastern China Airlines.  Restaurants can try and save face and claim the actual low cost of materials and cooking labor was no big deal, but when the cost of it all is something compared to zero, you’re still a loser.  The guy ate over 300 meals at the airport, and didn’t spend a single cent in doing it.  Internet hero.