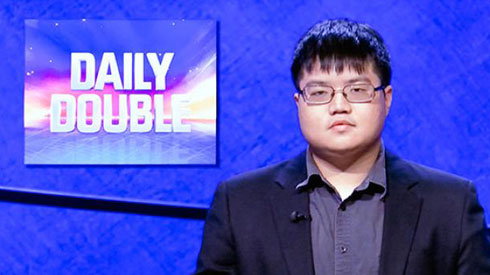 I don’t hide the fact that I take somewhat of a sadistic pleasure in occasionally mocking the Chinese. I’m Korean, and it’s something that many of all us Asian cultures do amongst each other, often ignoring what the rest of the world thinks about it. When the day is over, I have no objection against the Chinese or any other race; I couldn’t really care less about ethnicities as long as the quality of persons are acceptable to me.

However, something I also enjoy, is spotting sheep behavior/hypocrisy and calling it when I see it, even if it means inadvertently defending a Chinese guy. Basically, long story short, a Chinese guy, Arthur Chu, has been tearing up Jeopardy!, and this has been a problem for many fans of the show, as well as the eventual sheep that jump on a trending story.

Many of the detractors bemoan the way Chu is playing the game, because he is defying the typical meta of gaining control of the board, and clearing out categories systematically, one at a time. Instead, Chu is blatantly hopping around the categories, only pursuing the questions in the lower rows, which are all of higher values, but more importantly where the Daily Doubles are most often located. But it’s what he does with the Daily Doubles which apparently is drawing the ire of many Jeopardy! enthusiasts.

If it’s a category like sports in which Chu apparently knows nothing about, he goes ahead and “wastes” it, by throwing down an unorthodoxly-low wager of like five dollars and proceeds to concede instantaneously. It might seem like “a waste,” but the most important thing is that Chu has successfully denied his competitors from getting it, thus hurting their chances to increase their winnings and threat to compete.

Additionally, another tactic that Chu has been employing that has been making many scratch their heads incredulously, is that he has been playing for the tie. In Final Jeopardy, Chu has been calculating wagers that would have tied him atop the game with a fellow competitor; it has worked once, and failed a second time on account of the competitor failing to answer correctly. But basically people are asking him why he’s trying to tie, instead of outright win?

The answer is actually really simple, because it really doesn’t matter if you’re tied for the lead or the only one with the lead, because you get to play again regardless. Logical thinkers have realized that playing for the tie, Chu is essentially attempting to handpick a competitor for the next episode, and when the cameras start rolling, he is already going in with a better understanding of one of his competitor’s strengths and weaknesses. Having familiarity with one of two competitors would put any player in an advantageous position.

And then, because once sheep begin nitpicking, there’s nothing they won’t eventually hate, Chu’s hyperactive behavior apparently aggravates many people. He’s often times jamming on the buzzer, clicking away furiously, and when he gets to speak, he’s extremely quick to answer, almost pushy towards Alex Trebek to keep the game moving. Again, looking at this logically, it makes perfect sense, because the more time not just Chu, but all players, get to play the game, the more time they all have to possibly make more money to bank. But for the sake of internet ire, let’s throw logic out the window.

Regardless of the blatant strategy of hunting for the Daily Doubles, hyperactive clicking, and playing for the tie, Chu is still very good at the game. He knows his shit (save for sports), and there’s really nothing anyone can say to deny that.

But he’s still generally hated by the majority of the masses, mostly because he’s different. Different in how he plays the game, and what many people are thinking but won’t admit to, different in the fact that he’s a dumpy, chubby, bad haircut, glasses-wearing Chinese guy, and he’s wrecking shop, repeatedly winning, and denying ‘Murica from someone more aesthetically pleasing and possibly more intelligent from taking a spot in the show. Even naïve hipster outlets are backhanded and veiled with their assessments of Chu, often times using the words “hacking” or “exploiting” to describe how he is winning, as if that’s all Evil Chinese Villians were capable of doing.

In spite of all the hate, Chu has been righteously been brushing it all off and in fact seemingly feeding from the hate. Twitter, bless its heart for being the ugly reality for most peoples’ spontaneous-yet-truthful thoughts, has been a cauldron of spiteful people saying everything under the sun to try and get under Chu’s skin, and Chu has almost gleefully been retweeting and shutting down haters left and right for continuing to make him more relevant and “trending.”

But hopefully, a lot of this unjust sheep-herding prejudice will simmer down a little bit, because legendary Jeopardy! champion Ken Jennings wrote something pretty interesting recently on Slate. And everyone loves Ken Jennings, because he won like 75 consecutive Jeopardy games and raked in a few millions of dollars in the process.

Basically, he confirmed and applauded everything that Arthur Chu has been doing, because it’s the most statistically sound way to improve your odds at making the most amount of money and staying on the show.

However, what I loved the most was the fact that Jennings took the elephant in the room, and put into text what most everyone has been thinking but doesn’t want to say, because they don’t want to be perceived as the racists their thoughts might actually make them:

There’s an obvious racial angle as well. Chu, a bespectacled man with rumpled shirts and a bowl cut, plays into every terrible Asian-nerd stereotype you’ve ever seen in an ’80s teen movie. Charmingly, he seems to enjoy the role of the scheming outsider.

And there we have it. Whitey can’t stand the yellow man running the table with the ‘Murican game show.

Anyway, the funny thing is that the people airing Jeopardy! aren’t stupid. They’re probably as astute to the rumblings of social media as much as the neckbeards bemoaning Chu’s existence are. In the end, Jeopardy! is still a television show, and the only thing that ultimately matters is ratings. As long as people talk about Chu, they’re often times tuning in. Networks don’t care if they’re tuning in because they’re hoping to see someone lose, as long as their televisions are staying on their channel.

I like to think that Jeopardy! could very well let Chu go as long as he’s capable of going on his own, and when the times comes when Chu becomes old news and people lose interest, Jeopardy! could probably try and get him off on their own, by incorporating Final Jeopardy questions that attack his Achilles heel, like sports; betting small or nothing is always a risk when there’s competitors in striking distance in Final Jeopardy.

But until that time comes when people no longer care about Arthur Chu, why should they try and expedite him off of the show?