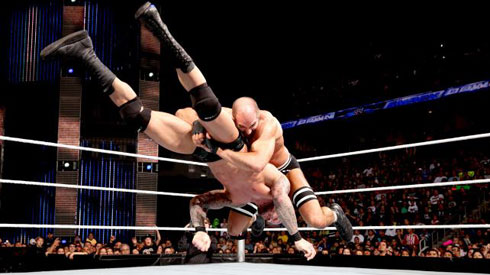 The ending to this past week’s Smackdown was probably the best ending to a Smackdown there has ever been since the program came on the air in 1999.  Never in a million years would I have actually thought that [don’t-call-him-Antonio] Cesaro would get a clean win over Randy Orton, no matter how much I preferred Cesaro over Orton any day of the week.  I totally expected Orton to kick out of the Neutralizer and hit some hackneyed RKO out of nowhere for an infuriating victory.

But he didn’t kick out, and Cesaro got a clean win on national television.

I actually came out of my seat at that moment and pumped my fist at that.  I’m 31-years old and cheering over the result of a professional wrestling match.

As a fan, I think this was a win on the level of Benoit winning the world title almost ten years ago for me.  Seriously.

Throughout the last few years, nay, decades, wrestling had become very formulaic.  It got to a point where I felt that I had a pretty good knack for predicting what the match results were going to be; sure, we all grew to know that wrestling was scripted and everything was predetermined, but the fans at home were never privy to that kind of intel, so it was all still guesses for the fans at home.  Anyway, I was pretty good at predicting things, and the joke nickname I had amongst my friends was “the oracle.”

The thing is, which does not bode well for the wrestling industry is that this moniker was able to stick for the better part of the last 16 years or so, because the wrestling industry was really that formulaic and predictable.  There are lots of unwritten rules that have maintained in play, like the rule of three years, where all storylines, gimmicks and even signature maneuvers that were once used, are fair game again after three years.  It’s things like that, in spite of the fact that I still watch and enjoy wrestling, have always made it continuously predictable.

However things seem to have finally begun changing over the span of the last year or so.  With a supposed new regime, and the continued evolution of social media, wrestling, namely the WWE has really been entertaining as of late.  It’s like they know that we know that they know, like it’s some Ben Stiller monologue from Dodgeball, but I think it’s fairly accurate in describing how the WWE is operating these days.  Maybe they’ve realized how formulaic they’ve become, or maybe since they’re always keeping a keen eye on the internet and social media especially, they’ve learned that they’ve become formulaic, and more importantly decided to do something about it.

At any given time, it’s like it’s a constant game between the WWE brass and the internet, where names trend, opinions float, discussions happen en masse, and WWE people are always watching and listening like voyeurs for potentially useful information and ideas.  And then maybe they decide to float out some information which turns out to be misinformation, or maybe not, just to see what the reactions would be.  If the cliche of “all performers being shades of gray” applied to the wrestlers themselves in the late-90s into the 2000s, then we’re probably at the age of grayness as it comes to the workings of the wrestling business itself now.  Personally, I fail to believe any occurrence in the industry as completely legitimate (i.e., CM Punk’s “walkout”) often using the phrase worked shoot, which is another way of saying an act meant to look as realistic and genuine as possible.

But all in all, these are good things.  It keeps my interest piqued, and I continue to tune in, whether to see if I was right or I was wrong, but giving them the ratings nonetheless.

All things considered, I think the WWE is in a really good spot right now.  Despite how lame it sounds for a 31-year old grown man to say it, I admire the company for always growing, changing and adapting with the times as a business, even if the product may have been formulaic in the past.  Because from the business sense, there are companies out there that die every day because they can’t do the same thing, yet this fake phony sport with homoerotic undertones of muscular guys grabbing and throwing each other around in tights continues to succeed endlessly.

Despite the fact that the WWE has been fairly unpredictable over their storylines and character progression over the last year or so, I still watched the Orton vs. Cesaro match through the eyes of the old oracle, making a prediction that Orton had the match won before the bell even sounded.  After all, Cesaro, despite being popular with the fans and a legitimately great worker, was still underutilized overall by the company, and those guys never get legit wins over the top tier talent.  It was also on Smackdown, which has long been perceived as the “B-show” compared to Monday’s flagship RAW program, and there was no way a top guy like Orton was going to do the job on Smackdown.  And in the current storyline, where Orton was to face five singles matches going into a pay-per-view event, he lost to Daniel Bryan, beat Christian, and lost to John Cena prior; beating the unheralded Cesaro on the B-show seemed like a layup.

I didn’t think there was a chance in hell that Cesaro was actually going to win.  But he did, and I found myself absolutely ecstatic by the result.  I have no idea what’s going to happen next now.  Old oracle would naturally assume Sheamus is toast in the final of the five matches on Monday, so that Christian isn’t singled out as the jobber to the stars at the upcoming PPV, but Sheamus is also a top-tier guy, and that might not necessarily happen either.

I don’t know what’s going to happen next.  And in a way, that’s kind of exhilarating.