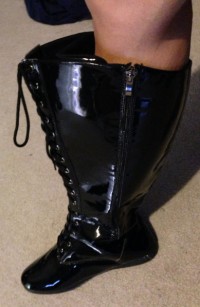 When I saw these boots on eBay, I thought “man, I should get these boots. They’d be great for all the times I’ve said I wanted to dress up as a wrestler at Dragon*Con or Halloween time.” So I purchased them; after all, they were only like $40 bucks, and would make a perfect accessory for a jokey costume or be the missing component for any belt-wearing wrestling outfit.

So when the boots arrived, I was super excited and pretty much put everything on hold after I got home from work until I tried them on. I put my right foot into the boot, and found it to be an adequate fit; slightly tight, but I figured after wearing them a little and a break-in period, that they’d be just fine. So then I attempted to lace the boot up, and that’s when the honeymoon ended.

Pictured to the right is my leg in the boot. The foot fits just adequately, as mentioned above. However, everything else, not so much. Not even close. The boot is laced as tightly as they can possibly be, and every lace and loop is tightened as much as they can.

If I had another right leg and didn’t have a foot on it, the stump would fit like a glove in the extra space that the leg of the boot provides.

“Not even close” doesn’t even come close to describing these boots.

The following image is probably a fair but crude representation of my actual leg within the boot, if I also happened to have a clown-length foot as well. The point is, in spite of the fact that the foot part of the boot is acceptable, everything else is not only beyond unacceptable, but it puts the accuracy of human physiology completely in question.

But back to these boots, defective or not, the boots currently in my possession are certainly something out of this world. Literally. I measured the diameters of both the ankles and the tops of the boots, so that I could accurately describe the problem to the seller, and the ankle is 13.75″ in diameter, with the tops of them being 22.75″ around.

For comparison, my ankle’s diameter is 9.75″ and the corresponding area where the top of the boot would sit is 14″. Proportionately, my legs look fairly normal; I know this kind of subject is a perfect setup for the inevitable “skipped leg day” and “do you even lift” jokes, but I’m actually fairly content with how my legs appear. 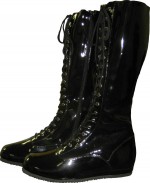 By the way, this was the glamour shot used in the eBay item description; it makes me wince to think of just how inaccurate this shot was, compared to what I received. It’s like advertising a Piss4, and getting a Daewoo walkman in the mail. The proportions on this boot actually look human.

The things is, in terms of physical proportion, the kind of human being that could adequately fill the boots I received probably couldn’t possibly exist. Even in spite of the shitty diagram, the normal human ankle begins at around the last 40-45% of the length of their foot. For example, my foot’s length is 10.5″ and my ankle begins roughly at the six inch mark of my foot. If my body were made to fit into this boot, then I would have three inches of foot before it rose into my ankle, and then expand drastically outward into a gargantuan tree trunk of a leg. My legs would pretty much have to look like Fionna from Adventure Time in order to accommodate these boots.

It’s funny, I thought that there was the chance that I was being paranoid and off-base, and before posting this, I wanted to kind of make sure that people that could fit these boots actually didn’t exist. I did some cursory Google searches on the topic, but the best was when I went to some results that steered me towards Bodybuilding.com forums, where people were discussing the diameters of particular body parts, namely ankles and calves. Long story short, even with these self-professed “bodybuilders,” ankles seemed to range within the 9-11″ range, but nobody was hitting 13.75″. Calves seemed to top out at around 17-18″ for the biggest braggarts, and even if they were exaggerating, they still weren’t coming close to 20″, much less 22.75″.

The bottom line is that I’m really, really, really hoping that the boots I got were a complete fluke and a defect. I really do want a pair of replica wrestling boots that look closer to the glamour shot than what I received, and ultimately, I don’t want a refund, I want what I thought I was purchasing.

Regardless though, there’s no fucking way in hell that I’m keeping these boots. Seriously, I could smuggle 2-liter bottles, two 12 oz. cans per boot, or kittens and teacup puppies in the vacant space of these things. 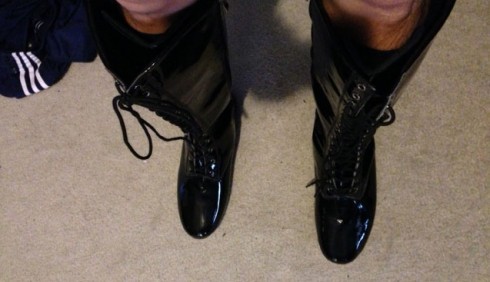