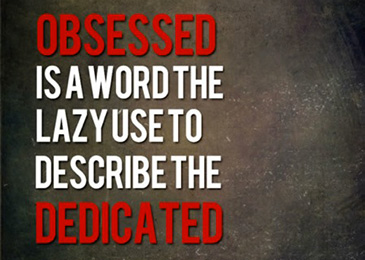 I saw someone wearing this statement on a shirt at the gym.  And I am pretty sure that I disagree with it, completely.

Simply put, in my opinion, I interpret the word “obsession” as having taking sort of enjoyment out of the subject being obsessed over, be it anything like Indian food, the Halo series, making and/or watching cat videos on YouTube, to the morbidly extreme, like disemboweling homeless people, assaulting hookers, or torturing small animals.

To some degree, I do not think there is a particularly positive connotation to the word “obsessed,” and is probably grounds for some concern for me, if it were ever directed at me for any reason.

Contextually, this shirt was for a popular website known for its enthusiasm for weight lifting, and it just so happened that Google image search found this particular image on their servers.  So it was pretty fitting that I saw it at the gym of all places.

If I were obsessed with working out, my dong would have a hard time staying in my gym shorts all throughout a workout, because I would be peeing or rubbing my junk on every piece of equipment that I use on a regular basis to attempt to mark my territory and hope that it’s sufficient enough to keep people off of my shit.  I would yell and scream orgasmically when maxing out on anything, and throw my weights down with a psychotic look on my face afterwards and a dark stain on my crotch.

That would be obsessed.

Dedicated is going whether or not you want to go.

When your body is wrecked after doing the Spartan Run on a Saturday and you’re sore all over still on Monday, but you limp down to the gym regardless, because that’s what you’re supposed to do on a Monday, have the most pathetic workout ever, but still show up and do it.  After a four-day weekend of drinking at Dragon*Con, trudge to the gym on Tuesday, and struggle through a session on the treadmill, sweaty and jelly-legged.

And Wednesday, Thursday and Friday.

Clearly, this ludicrous phrase was developed by someone with obsessive tendencies.

FTFY:
OBSESSED
is a word the
fearful use to
describe the
OBSESSIVE