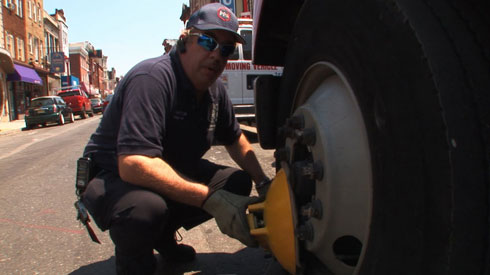 Over the weekend, I was back in my old stomping grounds, visiting my family and some old friends.  That in itself is a whole other story, but one of the things that stuck with me over this last trip was the sheer amount, or lack of parking there seems to be back in ol’ Fairfax County.

Parking has always been an issue up there, with there being vastly way more cars needing to park at places where there is no space, but during this past trip up, it was somehow worse than I’ve ever seen it before.  Granted, in this particular visit, Northern Virginia was still recovering from a lot of snow, with there being monumental banks of snow still unmelted and awaiting a rise in the temperatures for it to fully dissipate, but in so many instances, these giant hills of snow were more or less piled up in parking spaces, curbs, or along sidewalks.  None of this helped the perilous plight of parking, but I can’t imagine that things would be dramatically better if they weren’t around either.

Needless to say, from the time I arrived back in Fairfax County, it didn’t take long for me to see the ridiculousness of how far people went to secure their parking, because there’s frankly so little of it available.

Since my parents split up, family visits are somewhat of a nuisance having to pull double duty, in making separate visits, and staying with each as equally as possible, as to not show favoritism between mother and father.  Getting back to the point at hand though, upon arriving at my mom’s place, aside from the fact that the place had extremely limited parking to begin with, I was informed in advance that there would be a good chance that spots would be taken without them actually being taken.  People were literally putting chairs, whether they were of the tailgate or lawn, and in one case, an actual cheap dinner table chair, in parking spaces.  Apparently, in Northern Virginia, nothing lays legal claim to a parking space as efficiently as a chair.

We found a parking space surprisingly easily, but honestly, I can’t say that there isn’t one part of me that wouldn’t have picked up a chair and thrown it into some bushes and taken the spot if it came to finding an open spot with a chair in it, versus walking a quarter mile after parking on the street.  Especially since at that time, there were two toddlers in tow, and a fucking lawn chair isn’t going to stop me from making them walk in the bitter cold.

The following day, I went to go visit my dad at my old place, which was always somewhat of a parking logistical nightmare in its own right, with the saving grace that the most of the time I lived there, the two designated parking spaces per residence was sufficient.  However, when my household required three vehicles, it was always a nuisance to have the earliest of people home to claim one of the neighborhood parking spots, that were of massive scarcity, as well as a security risk (my mom’s stereo was stolen from one).

Along the way to my dad’s place, parking is allowed on the streets getting there, but they’re on somewhat of main roads, and require a good deal of walking just to get back into the subdivision.  I remember these as being always available when I lived up there.  Naturally, being present time, with Fairfax County exploding with overpopulation, the streets’ parking was lines of cars.

Upon pulling into my old home, there was an unpleasant surprise of a car already parked in the second spot, where my sister and I were planning on parking.  The first thought that ran through my head was “who the fuck?” but also the possibility that one of the neighbors had asked my dad to park there, since it would be perfectly acceptable if my dad had consented to letting someone use the extra spot.

Of course, upon inquiring with my dad, nobody asked and someone just took the spot without asking.  I assumed it to be the immediate neighbor, since they had two boys who are of driving age now no problem, and they may have assumed they could borrow it since they knew my dad had just one car, and that it was often open.  But without plausible proof, I couldn’t just knock on their door to confront them.

Man, I haven’t seen myself get so bent out of shape than the fury I felt at the principle violation of taking someone else’s parking space.  I sat in front of that window waiting for someone to come out and get in the car, so I could rip them a new asshole.  I contemplated writing a strongly-worded note basically saying “DO NOT PARK HERE AGAIN.  I WILL HAVE YOU TOWED NEXT TIME,” but I really did want to get in someone’s face.

Fortunately, I didn’t have to wait long, when two houses down came some Hispanic kid of college age, and upon sight, I was out the door and telling him to never park here again.  “I didn’t know,” was the canned-corn bullshit rebuttal, which I quickly shot down and explained to him that all parking spaces are private spaces, and reiterated to never park here again.

Bottom line is, the rest of the trip was more of the same.  No matter where I went up in Fairfax County, parking was scarce, and everyone was parked like a retard, because the snow provided a convenient excuse for people to park like dicks.  Across three parking spaces horizontally, because snow was covering all three of them preventing proper parking vertically.  Double parking on purpose because “snow was already covering half the spot, may as well capitalize on the free space”

All I could think of the whole time was praying to god that some Parking Wars shit would happen, where a meter maid would materialize out of thin air and start doling out parking tickets like he/she were flinging cards like Gambit from the X-Men.  Sure, I know that the banks of snow account for some leniency, but like in one particular instance where there were tons of available parking spaces, but people felt the need to park like douchebags so they could be lazy and closer to their destinations; those people deserved tickets.

I’d love to see the people of Fairfax County try and reason with the types of meter maids on Parking Wars.  For starters, there would be a whole lot of Middle Eastern or Koreans or Vietnamese people trying to plead with gruff and no-bullshit parking enforcement, when they’re getting booted for abusing visitor parking in their apartment complex, and causing a lot of awkward tension as there’s an unspoken racial hatred seething among both parties.

Or, it would be the smarmy douchebag in the BMW or the Mercedes who gets a ticket for triple parking, because their car is more valuable than everyone else’s, so naturally deserves more parking spaces.  They’d make threats, and talk a big game about the people they know, and how they could get so-and-so fired for giving them a ticket, but not a damn thing will happen when the citation is issued.

The bottom line is that Parking Wars: Fairfax County wouldn’t have nearly the fear of violence or the entertainment of inner-city folks getting busted for violating moving laws, but there’s no reason why it wouldn’t be nearly as entertaining or amusing.  Fairfax County denizens would be sharp tongued, awkwardly foreign, but completely incapable of being the least bit threatening to a seasoned parking enforcer.

And even if Parking Wars: Fairfax County never comes to fruition, I like to fantasize about what it would be like if a true, parking enforcer prime were let loose in the county.  I’m fairly sure that without exaggeration and embellished numbers, the dollar amount in fines could dig the country out of the national debt.