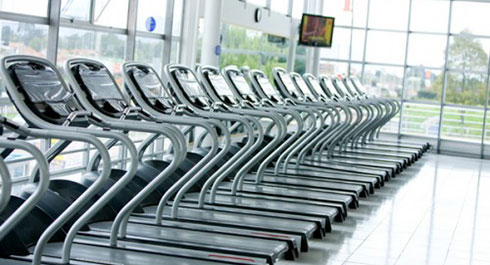 When it comes to selecting a treadmill to run on at the gym, it’s my belief that it’s very similar to that of selecting a urinal in the men’s room.  In other words, choose the treadmill furthest from another human being, and at the very least, leave a gap of at least one treadmill in between people.  The gaps are to be filled when there are no other options available, and even then, try and find the treadmill between at least one attractive woman.

Yes, I’m aware that my rationale and decision to write about something to trite and petty makes me sound psychotic, but these are thoughts that genuinely swirl through my head, when I’m on treadmill #17 out of 25 available, and in spite of the fact that pretty much 1-10 were completely unoccupied, two grown men insisted on using #16 and #18.

This, I do not believe, is in the least bit cool.

Needless to say, it cramps my style, and genuinely makes me feel a little claustrophobic being sandwiched in between two dudes who are vastly inferior runners than I am.  Not only does the clomping on neighboring treadmills a distraction, which no amount of volume increase on my iPhone can drown out, people quite frankly smell.  Sometimes it’s a musky sour BO, but usually it’s the heavy and thick lingering smell of 30 different fragrances that black men are fascinated about wearing simultaneously on themselves.  There is never an in-between.  Regardless, they’re smells that I don’t want to have to smell, especially when there are no less than 18 other available treadmills to have used instead of the ones directly on either side of mine.

Aside from the complete inconsideration of personal space and treadmill selection etiquette, I think I have a good speculation to why some of these guys are picking the treadmills right next to me – they see a slightly obese Asian guy pounding away on a treadmill, sweating like Patrick Ewing, and they think I’m the perfect patsy to make them feel good about themselves when they’re positive that they’ll outrun me with less effort and in shorter time.

Seriously, my gym has mirrors all over the place, I can see when a guy is trying to be subtle about what speed to set his pace at by peering over at my display screen while pretending to stretch, and it’s happened more than once where guys have literally entered in 0.1 mph faster than the pace I run at, thinking that they’ll naturally be better than I am.  Every time, they apparently fail to notice the part where I’ve usually been running for 15-20 minutes, with another 10-15 minutes left to go, and they eventually realize that I’m not doing intervals and that I’m maintaining such a pace throughout my entire duration.

When I suspect that I’m being used to be measured against, I’ll sometimes up my pace to discourage these campers, and make them possibly regret getting themselves into an invisible race that they have no chance at winning.  Today, I was running at 6.5 mph, which is slightly lower than my usual pace, but having run in the Warrior Dash over the weekend, I wanted to give my ankles a little bit of a reprieve.  So when the camper on my right started up, and set his treadmill to 6.6 mph, I waited until I was at a nice even new minute, and then bumped my pace up to 7.5 mph.  He did not follow suite.

The greatest satisfaction I get from these guys is when they throw in the towel after usually ten minutes, sometimes 15, but almost never do they run longer than I do.  Not only does the satisfaction come from the departure of smells when they leave, it’s also the mental satisfaction that when it comes to running, I own pretty much all of the prissy gym bros with my cardiovascular stamina.

But seriously, it’s really not cool to camp people who are already running by setting up shop right next to them, especially when there are numerous other treadmills to have run on instead.  The next time two people camp me while I’m running, regardless of the fact that I’d take satisfaction at outrunning and owning them and watching them bow out long before I ever would, I’m just going to hit the emergency stop, and be the one to move instead.  Frankly, I prefer running with breathable air, over owning people, but having to endure their smells and noises in the process.