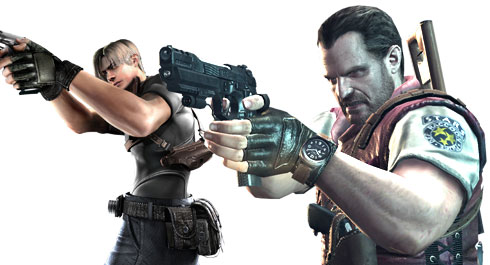 When the film adaptation of Resident Evil came out in 2002, I could easily say that I was pleased. Everyone knows the stigma of failure that is typically expected that of video game-inspired movies, but RE, in my opinion, did a great job of using the game series as inspiration, but for the most part, going in their own direction with a story. All characters were original, but the concept was the same, almost as if it were feasible that this story could have very easily occurred during the events of the game. Nods to the series were given throughout the film, be it through little things, like the design of the transport train, as well as more blatant things, like the inclusion of a Licker as the “boss” of the movie.

Resident Evil made a decent flick, because it wasn’t trying to be the exact game, portrayed in film.

I also had the hugest crush on Milla Jovovich, until I heard her speak in the director’s commentary.

Unfortunately, that success went downhill really, really fast, because every single sequel after the original film sunk further and further into the perils of bad video game movie making; they started introducing existing properties into each successive film, and doing horribly with poor casting, worse depictions and stepping on the throats of RE fans who want to support the film, Capcom and a franchise that they admire.

Regardless, I’ve seen them all. But if it means anything at all, the later sequels, I didn’t see in theaters, but when they were eventually released on HBO or Starz; and during preview weekends, because I don’t pay to have those premium channels regularly.

Which brings us to the last RE flick, Retribution.

I would just like to thank the good lord that I didn’t pay anything but my own bored spare time for this film, because it just keeps getting worse and worse. But like an abusive spouse with Stockholm Syndrome, I keep coming back for more.

It’s so easy to rip the film apart for a myriad of reasons, but I don’t see any reason in going too far in-depth with any of them. However, there’s one thing in particular that stood out to me that I’d like to isolate, because despite the exorbitant list of things the film did poorly, this one really nipped and gnawed at my fanboy appreciation of the actual properties of the series: the casting.

Namely, the casting of Leon and Barry.

First off, it’s kind of pitiful how Retribution goes on and essentially throws in “the rest of” the existing RE characters that weren’t utilized in all prior films. Apocalypse introduced Jill Valentine, Extinction added Claire Redfield, and Afterlife introduced Chris Redfield and put a face to Albert Wesker; all of whom were casted terribly with name actors and actresses, whom in spite of their integral role in the games, were relegated to sidekick statuses in film.

With Retribution going for pot and throwing in Leon, Ada and Barry all in one fell swoop, it really makes me wonder what the fuck they’re going to do next, because SPOILER ALERT, it’s set up for yet another sequel(s), which look like they’re going to be the Battle of Helms Deep from Lord of the Rings, instead of another RE flick.

But anyway, back to the point of this entire post, I’m especially disappointed with the castings of Leon Kennedy and Barry Burton.

Barry Burton is introduced in the first Resident Evil game as an unplayable character that plays a supporting role in Jill Valentine’s storyline. Despite the fact that he’s unplayable, he still earned a good deal of notoriety from his memorable, over-acted voiceover work throughout the game, with such nuggets of entertainment as “JILL SANDWICH” and “WHAT ISSSS THIS PLACE???” Those, and the fact that he carried a big, big gun and exuded a father-like manliness that earned the admiration of young impressionable players everywhere.

Leon Kennedy was introduced in RE2, but really made a mark for himself by being the primary star character of RE4, and brought back to shine some more in RE6. A rookie cop in RE2, he developed into a government ace by RE4 and was basically sent into rural Spain to do a suicide rescue mission to rescue the president’s daughter, by himself. Needless to say, he became the epitome of hotshot gunslinger-kung-fu-suave hotshot, and carried the role seamlessly into RE6, where he kind of did it all over again.

The picture at the start of the post is how the two characters were portrayed in the game series. Leon is handsome and clean-cut, estimated to be in his late-twenties/early-thirties throughout the timeline of the series. He’s the consummate bachelor, turning down the president’s daughter and his buxom partner because he’s fixated on Ada Wong who loves to tease and torment him. Barry is the veteran of S.T.A.R.S., and it shows in his hulking size, rugged face fuzz, slight receding of hair line, and general stout appearance. It’s known that he has a wife and daughter, and that his age is either mid-to-late-forties, possibly breaking 50. 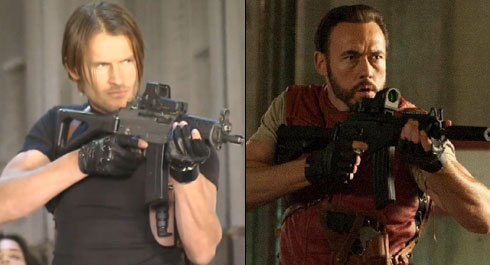 How they were portrayed in the movie, I’m not entirely sure how they came up with these guys. They’ve aged Leon, and found the fountain of youth for Barry. If there was a formula for how this happened, they extracted age and ruggedness out of Barry, and injected it directly into Leon. Subsequently, both guys now appear to be in their late-thirties, both have about the same amount of rugged facial fuzz, and for all intents and purposes, they were pretty much turned into clones of each other in the film.

I’m kind of astonished how this came to fruition; I get that directors and writers all want to take established concepts and trying to make them their own, but there’s only so much modification that you can really do before you alienate the smarty-pants fanboys into being disgusted. But even still, I can’t believe it’s really this difficult for W.S. Anderson or Sony Pictures to have this much difficulty in casting appropriate actors to visually portray established characters. Jill Valentine turned out alright, because they were still trying at the time of Apocalypse, but once they realized the films would bank regardless of their effort, they clearly gave up based on how they casted and portrayed the Redfields and Wesker, and even more so with Leon and Barry. Ada Wong sneaks under the bus, mostly by virtue of the fact that she was hardly used in Retribution, other than to reenact scenes from RE4, but with Alice instead of Leon.

Young guy for Leon, older guy for Barry; is it really that hard?

What’s worse? When Resident Evil: Evolution or Rebirth or Annihilation or whatever tacky subtitle they can slap onto it come out, I’ll probably still watch them too. But I wouldn’t pay actual currency for it.