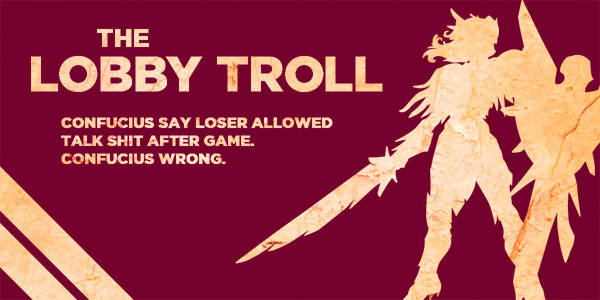 Every now and then while playing League of Legends, you’ll have the unfortunate circumstance of getting paired up with a player or players, that simply don’t show up to play, in spite of the fact that they took the time to queue up and give the impression that they were going to play the game. Just about every LoL player on the planet has dealt with this unfortunate situation, and despite the fact that on occasion, a gallant undermanned victory does occur, most of the time, the team with the missing player(s) usually end up on the side of defeat.

In the latest volume of the League of Lobby, my friends and I were in a game in which the opposing team was missing a player; notably, the person they probably believed was going to be their tank, whose job would have been to be a walking wall of health, meant to distract, interfere, obstruct, agitate, and be a general pain in the ass. They never showed up, whether it was due to shitty internet service, or my favorite belief, that their mom had kicked in their bedroom door, and forcibly removed the player from the keyboard.

Usually, in these types of games, there’s kind of this unwritten/unspoken etiquette from the fully-staffed team, that you try and end the game as quickly and mercifully as possible; after all, it’s never fun being on the side with the AFK’er. If you’re the full team, you don’t goof off too much, you don’t spam all chat with taunts or any cocky speak, and in the likelihood you win, usually a cursory “sorry for the AFK’er” remark of some sort. The short-staffed team will make as much effort as they feel they can win, but in most cases, being a man/woman down is usually a bad obstacle that ultimately snuffs out most rallies and attempts.

Back to the context of the story though, my team won the 5 versus 4 game. Prior to the killing blows, the losing team immediately began all chatting snide remarks about how we only won because it was 5v4, implying that defeat would have been a foregone conclusion had they had their fifth, because we clearly suck without the handicap.

For whatever reason, it’s like the losing team felt that they had all the excuse in the world to justify talking shit, because they just so happened to be on the unfortunate losing side. I did not agree.

Which meant that sportsmanship was thrown out the window, and it was time to have some textual sparring.

Welcome to the League of Lobby!

*user names changed with discretion, mostly because I don’t want the chance of these psychotic high-schoolers googling themselves, finding my brog, and tracking me down and going Columbine on my home.

QVC: you know whats sad
danny: you for thinking i care?
QVC: it was 4v5 and yall still sucked
WeeabooPenguin: you should care
danny: qq
QVC: picture if we had galio
virginia: Sho shalty
shane: Got my win of the day;
WeeabooPenguin: and not be a big ol’ *****
shane: Thanks for having shitty friends.
danny: i picture us still winning?
virginia: Still an L for you <3
QVC: so
shane: I was going to report for you.
shane: But instead.
QVC: you still did pooly
danny: rage moar, it amuses me
shane: eat a **** mr.
EroticRockZ: varus you were horrid so i wouldnt talk ****
danny: don’t care
danny: don’t care
danny: keep raging
QVC: lolololololol
virginia: LOL.
danny: it amuses me
QVC: varus u need cheerios
shane: lolololololol
QVC: to cheer up
shane: you loses
danny: who said i’m upset about anything?
EroticRockZ: yes we lost
virginia: Because he triple killed you so many times. So horrible.
danny: i’m cheery, because i see victory
danny: and you’re so mad
shane: Rage because you had afk and lost.
EroticRockZ: nono swain set up all kills
QVC: im actually not
QVC: its normal
shane: Was going to say you played well.
QVC: its a game
danny: lawl
QVC: ill get over it
QVC: you however
QVC: need to fix your attitude
shane: So your rage is normal even though it’s a game?
QVC: or youll never truly win
danny: aight confucius
virginia: Dude you started this by saying we sucked.
danny: ^
QVC: its true
virginia: We still won, afk or no.
shane: Fix your punctuation or you’ll never truly anything.
virginia: And no one said anything until you ran your mouth.
QVC: lmao
danny: we could have danced, taunted and spammed laugh
danny: but we didn’t because it was 4v5
danny: but then you had to start raging when we won
EroticRockZ: He never raged
QVC: pointing out your performance isnt raging
danny: so what, are we supposed to do, sit there and take it when you say we suck for winning a 4v5?
EroticRockZ: ^
QVC: you truly did stink
shane: You should get better friends so when you play well you don’t still lose LeBron.
danny: well, you truly did lose
danny: so i think i still win this exchange
danny: qq more, you’ve made my night
QVC: you win for now
QVC: but remember it
shane: We will.
QVC: ill see you again (no he won’t)
danny: i will
shane: Because we’ll post this online.
danny: trust me,
shane: Because your rage.
QVC: lmao
QVC: k
QVC: do it
shane: Did you not read what I just said?
QVC: yeah
danny: don’t worry
QVC: and
danny: it will
shane: I don’t need your blessing.
QVC: well you said you will
QVC: what did you expect
QVC: me to whine and rebuke my sins

QVC started getting all biblical and started trying to use words he didn’t quite fully grasp the applications of, so I left before he could continue to ramble on.

Their claims that I did poorly are partly warranted, because in the end, I did die ten times. However, I still had 12 kills, so for what it’s worth, I was still a positive contributing member.

Regardless, it’s funny how people feel the need to justify the reasons why they lost, instead of simply just saying that they got beat. I’ve had my share of ARAM games where I’ve lost in like 13 minutes, and frankly, there’s absolutely nothing to say, but “what an ass whoopin.” You’d be surprised how many times I’ve gotten honorable opponent for such frank honesty, but where would the entertainment be in that?