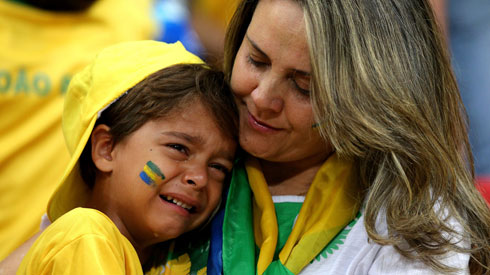 I’m pleased to see Germany win the World Cup.  Anyone who pays attention to soccer should know that this shouldn’t have been that big of a surprise, considering Germany pretty much demolished their way into World Cup qualification, and there was little reason to believe that it would have been any different throughout the tournament.  Maybe the 7-1 pownage of Brazil was a little bit surprising, but the fact that they were as good as they played, and that they actually won it all, wasn’t that big of a shocker.

But speaking of Brazil, the day before Germany iced the cake, was the ever-essential third place match.  Most cases, the third place match is completely irrelevant, nobody watches it, and the players themselves don’t even want to be in it.  But in a few instances, like this World Cup, it has meaning, because the host country is in it.  It’s the final hurrah for the host’s gallant effort to reach the top, and it’s one last opportunity for them to get what 15 other teams do not get: a chance to end their World Cup experience with a victory, instead of going home in defeat.

Unfortunately, this also means that one team risks ending their World Cup experience with not just one loss, but two.

Honestly, as much as I wanted to see Brazil lose in the third place match, I didn’t really think it was going to happen.  They’re far too proud of a country, often times to cocky degrees, and if anything at all, they had more than anyone else left in the tournament to bust their ass and play the game of their lives to end on a glorious high note, instead of the absolute embarrassing failure of their humiliating loss to Germany.  I didn’t think the Netherlands had much of a chance, because Brazil had to be coming out to play like pissed off teenagers, ready to take on the whole world.

So color me surprised when watching the third place match, Brazil plays as apathetic and lethargic as ever, and they end up losing 3-0.  This made me happy.

Ironically, apparently the country had gotten so used to seeing Brazil give up goal after goal, from their prior match against Germany, that when they started giving up repeated, unanswered goals to the Netherlands, the fans seemed not just defeated, but almost as if they were expecting it by this point.

Nonetheless, some photographers did not disappoint.

Seeing as how for whatever reason, Lynsey Hipgrave wasn’t shown during the final match in favor of the worthless generic Mike Tirico, I’m going to have to say that just the sight of more crying Brazilians was simply, the best thing about the 2014 World Cup.  gg.