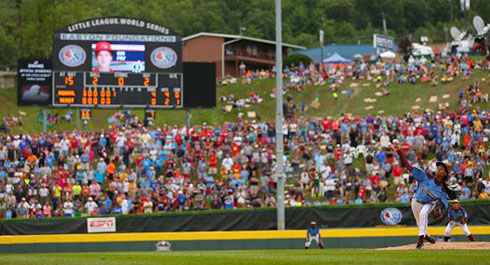 Originally, I wanted Mo’ne Davis to lose, because the hipster in me always wants to see anyone hyped up beyond the stars be brought back down to earth, and to remind everyone doing the hyping that nobody is bigger than the game.

Mo’ne Davis did lose, and the Taney Dragons are one more loss away from elimination from the Little League World Series.

But in the aftermath of the loss, I realized that I wasn’t happy that the hype machine was knocked off its tracks.  Mo’ne Davis, in the span of the last week, had been turned into this symbol of hope and expectations for not just the female gender, but also the entire African-American race, and I’m happy that the symbol of hope and expectations was knocked down a peg by her defeat.

Mo’ne Davis is just a 13-year old girl who happens to be very good at baseball, and I think it’s completely unfair and unnecessary that adults and the media heap all sorts of unnecessary titles and pressure onto the shoulders of a kid.  Sure, she’s a she, and she also happens to be black, but on a team, neither of those are supposed to matter, as long as the team as a singular unit can win or lose, together.

Adults and the media are trying their hardest to do exactly what teams don’t want an individual to do, which is put themselves, or be put, above the rest of players the team.  Mo’ne Davis might have been throwing shutouts in the games prior to her loss to the Nevada team, but if not for her less-heralded teammates, they Taney Dragons wouldn’t have the runs necessary to turn those games into victories.  And lo and behold, not all of Mo’ne Davis’ teammates are girls and/or black.

Needless to say, it disgusts me that adults and the media are tarnishing the game of baseball at almost its purest level, to schill an agenda of inequality in gender and race.

I definitely feel bad for Mo’ne Davis, because she’s an outstanding player, and even in defeat, has conducted herself in a manner in which if I were a parent, I’d feel so swollen with pride with.  But in the grand spectrum of things, I think it’s best that she lost, so that people can be reminded that it’s still, just a game.

I say everything without being definitive, because at the time I’m writing this the Taney Dragons are not out of it yet, and have a chance to still win it all, as long as they can pull together two consecutive wins, with Mo’ne Davis eligible to pitch again if they make it to a second game.  And if that happens, god only knows what circlejerk shitstorm of symbolic hyperbole the media will come up with next to anoint Mo’ne Davis with.

Although it’s not going to happen, if Mo’ne Davis were to get the opportunity to pitch in a championship game, I would really appreciate if the floodgates would hold for until after the game has concluded, to flood the world with all sorts of misdirected gender and racial rhetoric, so that maybe, just maybe, the 13-year old with the elbows-and-knees delivery and wicked curveball can focus on the game, and give the Taney Dragons the best chance to win.

It’s just baseball.  Let the kids play baseball.  Save the bullshit for after the game’s over.