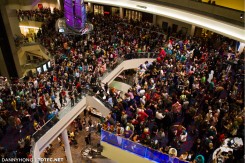 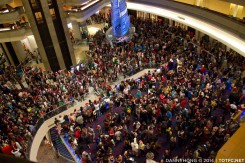 I know it’s ludicrous to say such a thing, considering that at least at one point, every single person in the convention, myself included, uttered words along the lines of “it’s so goddamn crowded!” and that it was as a result miserably sweltering hot, and so forth.

Looking back at the weekend that once was, I actually think that this year’s D*C wasn’t as crowded as last year’s. Not to say I didn’t get agitated by my share of walls of sweaty humans from time to time, but the fact is, it sure seemed like I ran into a lot less of them than I have had in prior years.

Naturally, the worst crowds coincided with the never-timely release of panels or events, causing mass influxes of human traffic into the existing masses, but what it boils down to is that at least to me, it sure felt like there were far smaller numbers of said existing masses. What it boils down to is that it seemed like there were far less numbers of people simply milling around and hanging out, as opposed to people trying to get from point A to point B at any given time.

Look at the two photos above; the left one is from this year, and the one on the right was from last year’s D*C. Both look tragically crowded and make me want to gauge out my eyes just thinking about having to traverse through such numbers, but this year’s generic crowd shot doesn’t look as densely packed as last year’s did. This is no more evident than in the Pulse loft, where there’s visible space to stand compared to when there wasn’t.

I’d say hotel and convention staff must have stepped up their game in keeping human traffic flowing, but that wouldn’t be true, considering that like in highly contested spaces like the marble floor between the two wings of the Marriott’s atrium level where in previous years have been enforced like Ferguson, Missouri, were completely overrun by people stopping for photos and the usual tendencies of people milling about.

Now two cherry picked photos do not make such claims legit, but it’s worth mentioning, or at least something for me to write about while reminiscing. Obviously, there are lots of claims how this year was yet again the biggest D*C EVAR, and how the numbers surpassed 62,000 or something like that, but it sure didn’t feel like it did.