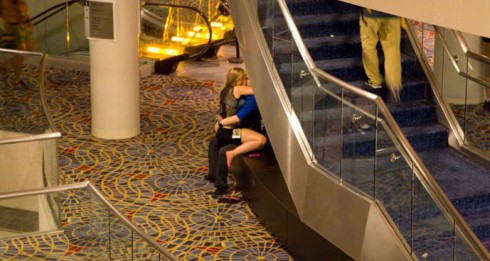 Okay, I wanted to address this, before someone sees this picture in the eventual gallery and thinks “wtf, danny’s a fucking voyeur perv.”

Naturally, there’s a story behind it.

It’s no secret that lots of conventions, and not just Dragon*Con, are full of sexually frustrated boys and girls, hoping to get their rocks off at some point during the weekend.  After all, conventions are kind of the perfect setting; what with being away from home, a mutual meeting place for those who have been courting one another be it in person or over the internet, or those simply hoping to spontaneously meet and engage in a quick fling.  And in the case of D*C, there’s probably no other convention with as much alcohol flowing throughout the concourses and hallways, and with alcohol often times comes questionable decisions.

Seriously, these guys were going at it for like 30 minutes.  And I wasn’t the only person to have noticed them, much less take a picture.  And it’s not like they didn’t pick up on the fact that they were being watched, but when they finished (not in that way, at least I hope), they were met by raucous booing, and then applause for the free show.

And then we all told them to find a stairwell, if their roommates wouldn’t let them commandeer a room.

It’s not like I have to explain it, they’re the ones who decided that it was a good idea to be dryhumping in public.