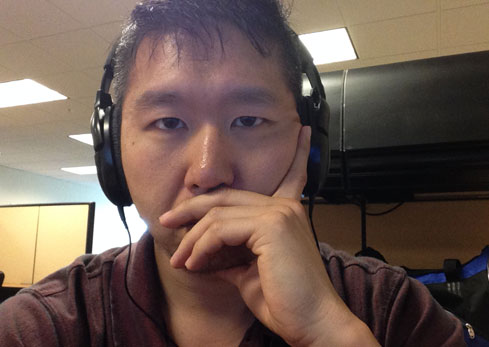 This is what I look like while I’m at work.  I am not having a bad day, and I have had an invigorating workout previously, meaning the day is vastly better at this time than when it started.  I’m not necessarily happy, but I’m definitely not upset or in a bad mood.

Anyway, more than I wish for it to have occurred, I’ve once again been told by one of my co-workers that has a spine, that my correspondence with work-givers has once against given off the wrong impression to one of them.  Instead of ditching the keys and coming to me directly to discuss project-related discrepancies, they have decided to maneuver around me, and try and get someone to speak to me on their behalf, citing that I was being “difficult.”

If the definition of “difficult” is sending back a project on account of not being given enough (read: essential) information on how to complete said work request, and requesting specific information, and specifically what they could do to expedite said information (write it out), then I suppose that I were being difficult.  However, I like to believe that I was making legitimate, reasonable inquiries, and that the person I am working with is being lazy, obtuse, and lazy.  The spineless part comes, when they circumvent actually working with me, to complain about how I’m being obtuse for asking reasonable things, like information vital to the completion of their project.

This is the third documented time that this has occurred.  Once is someone too sensitive, twice is less questionable, so three times means that I must, definitively, intimidate people in my office.

I can kind of understand why this is probably the case, because I have resting bitch face, and I’m often times equipped with my headphones, because I have a co-worker that’s always on the phone with doctors or scammers.  But the combination of an upset-looking disposition, and the headphones clearly gives off the impression that I want my peers to fuck off.  That’s not entirely false, but when the day is over, I still take my job seriously, and if anyone comes up to me to discuss a project, the headphones come off immediately, and I’m ready and willing to discuss on how to get the job done.

The problem is that people are clearly too afraid of doing such, because this is the government, and everyone that’s a part of it is spineless and lazy.

So if I’m all mean looking and scare my co-workers, so be it.  I accept that.  I can’t change my face, and I can’t change my peers from being on the phone all the time making me want to have headphones on to drown them out.  If they don’t want to do their job on account of being afraid of me, that’s their problem, but it’ll probably make them shit their pants when I go to them to resolve issues, because I do take my job seriously, and their petty incompetence isn’t going to prevent me from doing it.