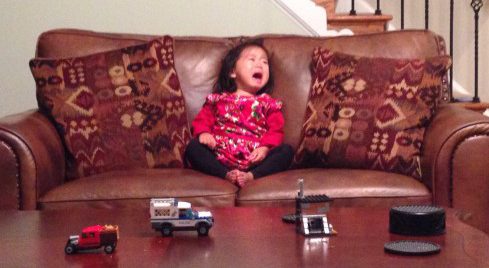 The following is a spatter of random thoughts that have gone through my head throughout the course of the holiday. I may or may not attempt to chronologically sort them when I’m done, as I’m pecking this out on my busted iPad.

The above picture is my wailing niece. I wanted to have some sort of visual to accompany this post.

This trip is the first time that I’ve brought my own car into the Commonwealth of Virginia in quite some time. The last time I drove my own car on my old stomping grounds was when I still had my old Nissan and I still felt it had the legs to make the trips from Atlanta to NOVA. Part of it is refreshing and fun to drive my own car on old familiar roads, but another part is apathetic and piteous of the residents of Virginia, whom have apparently been beaten into submission of driving like sissies in fear of the overzealous ticketing and fine system in place here. Safety is one thing, but the legions of people camping the left, passing lanes, going the approximate speed limit are bigger hazards to other motorists than the occasional tryhard going 88 mph, I would hypothesize.

Now I’ve made no secret that I’m enthralled by Brack Friday shopping as well, but I still have yet to cross that threshold of going out on actual Thanksgiving Day, and I don’t think I will. Most merchants already put all their shit online as of the last two years, and it’s pretty easy to knock out a lot of shopping by Wednesday now, at the expense of somewhere from 10-20% less savings, if any at all.

But I kind of think that Brack Fridays in general are about a year or two from being overkilled to death. It’s not because I’ve personally had little interest in it this year, but because it’s really seemingly like the cusp of capitalistic gains is being quickly reached, and it’s maybe a year or two away from merchants doing their “sales” online all week instead of just Friday, and the ensuing rat race of competitors trying to keep pace. And then it will escalate to people getting killed over a $10 waffle maker on Brack Friday before Brack Friday, or human stampedes on Brack Tuesday and someone getting shot over a $250 Piss4 on Brack Wednesday. It is definitely getting worse.

It’s funny how sometimes the only thing that prevents or allows someone to have a bad day is the person themselves.

Due to miscommunications, and some seemingly petty discontent over the notion of driving for 90 minutes, I basically missed Thanksgiving dinner, because it started at 1 pm, and I didn’t arrive until 3:30. By the time I arrived, the food was completely gone, and some of my relatives had already peaced out. A part of me felt rather disappointed in the way things had turned out, and was actually mulling on whether or not this should be chalked up to being a bad Thanksgiving. But a plate with an adequate amount of food was set aside for me, and I still got to eat some turkey, stuffing, potatoes and typical foods. I still got to see several relatives who were still there, and still managed to get the third degree lectures on how I need to get married and unload the curse of a house I reside in now.

It wasn’t exactly the Thanksgiving gathering I had hoped for, but it wasn’t bad enough for me to allow myself to creep into a bad mood. Nor was the added 90 minute drive from Richmond to my old stomping grounds, and the ensuing life’s lectures at my aunt’s place.

I was thinking about this in my car in one of the numerous long drives I had to makes today. I was kind of on the fringe of putting myself into a pity party and letting my mood sink into an unhappy one, but I forged the mental fortitude to realize that nothing was truly that bad, and found myself kind of using that line of thought as impetus to brog this now.

The circumstances of this trip weren’t necessarily the best, but I’m making the best of everything that I can. Thanksgiving itself, in spite of being spent mostly in my car, wasn’t really terrible, despite earlier thoughts that it might be. I’m a little puzzled at my general apathy with Brack Friday shopping, but I guess that’s not a bad thing either. Doing manual labor tomorrow will kind of stink, but there’s still salvation at the end of the tunnel yet.