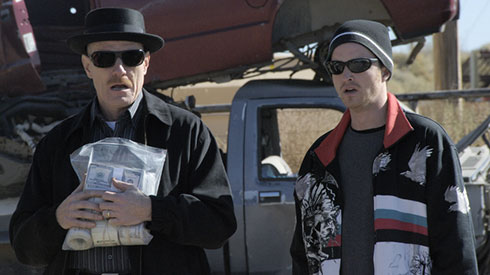 I started watching Breaking Bad.  Yes, I’m like five years behind the curve on this one, but anyone that knows me knows that that’s usually the case; I mean, I just started reading Game of Thrones too, and that’s about as equally behind the curve as far as current trends are concerned.

Either way, I like Breaking Bad, as I knew I would once I actually started to watch it.

But man, is it sometimes a dangerous show to watch, for anyone who may or may not get tendencies to grow disenchanted with their own jobs.

Naturally, I’m alluding to the fact that I recently got one of those assignments at my job that really makes me cringe, whine and protest, at how generally insulting it is to my profession.  Naturally, I am talking about a project that involves the end product needing to be delivered in PowerPoint actually Excel this time, but still, equally as Microsoft Office, and equally as utter bullshit.

The part where every time I get an assignment where the deliverable is requested to be a Microsoft Office file, I hate my job and I hate my life, I feel bad for my line of work, and feel utterly disrespected as a graphic designer hasn’t changed.

Seriously, why the fuck would I want to continue delivering shitty fucking Microsoft Office files to luddites who don’t value aesthetic order and the importance of clean visual aids, when I could probably make 50 times my annual salary if I became a meth kingpin instead?

Undoubtedly, the first thing I would do upon realizing that my eyes were open and that I was truly free, would be to march into Best Buy or Staples, and fucking rip the entire shelf down that was carrying Microsoft Office.  I would then stomp every single copy, security case and all, until they resembled the crystals I was slinging for mad profits.

Sure, there’s the whole issues with morals, a bitchy meddling wife, Mexican cartels and the DEA, but god damn, the idea of ditching my mundane office job full of uneducated and ungrateful end users for the lucrative life of a methamphetamine drug lord seems like a vastly superior option.