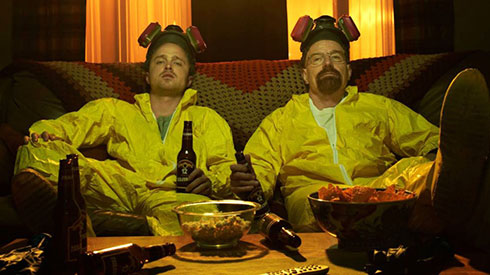 Being the bastion of keeping up with current trends and things people are crazy about, I’ve finally watched my way through all of Breaking Bad.

It goes without saying that I will be discussing some things that might be perceived to be spoilers, but I will keep those behind a jump, because I understand that there are plenty of people like me that seldom watch television live, and prefer to watch things in chunks and marathons, even if it means seeing them long after they’re current.

As a whole, the series was in fact, great. A grand wealth of character development, clever and intelligent writing, plot twists that aren’t blatantly obvious, and a general respect for the viewers’ intelligence with how things are presented, and are not always spelled out to be easily predicted.

Several times, I’ve seen the debate on Breaking Bad versus Dexter, when people talk about television dramas, and what they think are better. To no surprise, I haven’t seen Dexter beyond season five, and I’ve heard nothing but terrible things about seasons six to the series’ finale, but I remain steadfast in my opinion that season four of Dexter, with John Lithgow as the Trinity Killer, is still one of the greatest seasons of television that exists.

It goes to be a flawed conclusion, seeing as how I haven’t seen the final three seasons of Dexter, but as it pertains to the Breaking Bad versus Dexter, I will (tentatively) conclude that Breaking Bad is the superior series as a whole, but no single season of Breaking Bad was better than season four of Dexter.

Regardless, I enjoyed Breaking Bad immensely, and it was fun to blow through five seasons worth of interesting drama over the last five months. It feels good to be caught up with the rest of the cool kids that have seen and enjoyed Breaking Bad, and now I have the opportunity to indulge, and amazingly, possibly become current with its spin-off successor in Better Call Saul, which I’ve been DVRing, and not watching, wanting to finish Breaking Bad first.

Anyway, onto spoiler talk, because there’s something I wanted to get off my chest in regards to the show’s conclusion. 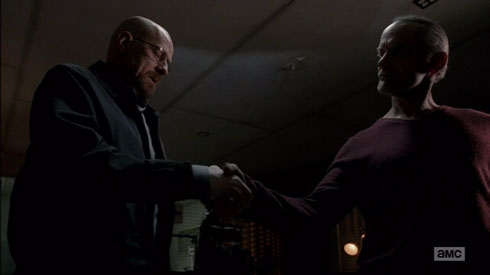 That’s what the show ends with?

All through the fifth season, and when it became apparent with the number of episodes left, and the time left in the series that Uncle Jack and his stable of white supremacists would be the veritable last gang of merry miscreants the show would deal with, I couldn’t help but feel disappointed, almost disgusted at what a copout it felt like.

Gus Fring was a masterful adversary. I absolutely adored Gus Fring, because I’m always in awe of characters that are as cerebral, calculated and intelligent as Gus Fring. He was the literal queen on the chess board, capable of anything and everything, and he was always ten steps ahead of everyone. His empire dominated the better part of three seasons, and it was a rare mistake in Gus’ part, fueled by vengeance and arrogance that Walt was finally able to capitalize and outwit him that led to his demise.

Gus Fring was a beautiful adversary, and a villain worthy of the series.

Fucking Nazis sounds more like a kid who played too much Call of Duty needing justification to feel enjoyment in killing fictional bad guys, because there might be a modicum of guilt of killing American police officers in Grand Theft Auto, or killing people who might be defending their own just cause in any other sort of mass killing game.

Nazis are just kind of like, the ultimate copout bad guy, when a story needs villains that absolutely nobody in the world will feel any empathy for when they are inevitably defeated.

Nobody feels sorry for Nazis, except maybe other Nazis, and even that’s debatable.

I really enjoyed Breaking Bad, but damn did the use of Nazis seem like such an insult to the progression of the story.

Sure, the Nazis might have been not necessarily the “main” bad guys, considering it’s more about Walt’s god complex and how his greed and empire business are really that impetus for all the bad things happening in the story, but still, third-party adversaries were necessary to facilitate the advancement of the plot. Them being Nazis just seem so beneath a journey that has had such good adversaries as Gus Fring and even Hank Schrader.

I can’t get over it. I still maintain that I enjoyed the series as a whole, but I can’t help but feel a modicum of disappointment that in the end, what brought down the world on everyone wasn’t Gus Fring’s cerebral calculated chess-playing, T-1000 Hank Schrader’s relentless pursuit of justice, or even a legion of Mexican cartel gangbangers, but a bunch of stereotypical Nazi shitheads. :/