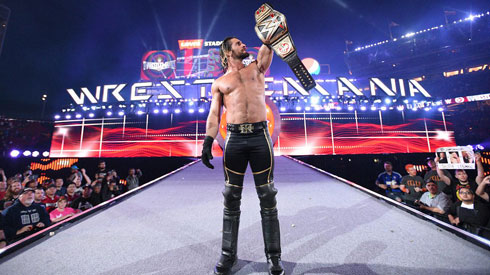 I would never have expected Wrestlemania’s main event to have been as gripping as it was.  Honestly, I tend to temper my expectations for Wrestlemanias in general, but ultimately, I treat them like I’m watching RAW; skim and glaze through everything, but typically ignore the main event.

For the most part, all of Wrestlemania 31 was pretty formulaic, and nothing was really that big of a surprise.  I would have liked to have seen more Cesaro, Axelmania and Damien Mizdow, and it’s kind of an insult that both the tag team match and the Andre the Giant Battle Royale were put onto the pre-show, but whatever.

I had higher hopes for John Cena vs. Rusev, and was a little disappointed to see that they broke my theorized rule of Wrestlemania, which is needing to hit three finishing maneuvers before the match can be decided.  I didn’t expect much from any other match, be it the Divas, the Intercontinental ladder match, and definitely not Undertaker vs. Bray Wyatt.

Sadly, things like the Rock and Ronda Rousey squaring off against Triple H and Stephanie McMahon was more captivating programming than many of the actual matches.

Needless to say, when the main event rolled around, I couldn’t help but feel impending dread at the dregs this match was going to be, and wondering how Seth Rollins could salvage it.  There was no way in my mind that Brock Lesnar and Roman Reigns could have a decent wrestling match.

Apparently, that’s what the bookers might have thought too, because they didn’t book a wrestling match, or at least that’s what it turned out to look like.  And that’s what ultimately made it as good as it was, completely unbeknownst to my expectations.  And then, did Seth Rollins come to save the day.

When Brock Lesnar was bloodied a minute unto the match and then countered with his signature F5 followed by what was around 20 suplexes, coining the phrase “Suplex City, Bitch” in the process, the match became way more intriguing than I thought it could possibly be.  It became questionable as the minutes ticked on at what point the decision to stop wrestling, and the decision to start hitting each other as hard as they could began; wrestling matches are all scripted, that story is very much out, but it was apparent that both Lesnar and Reigns were delivering some pretty stiff punches and knees to one another, and such wasn’t lost by WWE cameras, as they made sure to show super-slow-mo replays of just how brutal some of their blows were landing.

By the time Rollins emerged to cash in the Money in the Bank, it was almost more of a disappointment, because that symbolized the nearing of the end of what had become a very interesting match between Lesnar and Reigns.  I was actually hoping for more one-on-one between two guys I didn’t think could have a captivating match, and figured there would be another F5, ten more suplexes, two more Superman punches and probably five spears.

I have to give credit to where it’s due, because this main event blew me away with just how good and entertaining it turned out to be.  I’m clearly in the camp that believes Reigns is indeed too green for the world title, and even though he didn’t win the match, I have to admit that I have a tremendous more amount of respect for the performer than I did going into the match.  Although he didn’t win the title, he still had a very strong showing, and as much as it might agitate those smarks who want to see him buried now that Wrestlemania’s behind us, that simply is not going to happen.

The storyline basically writes itself now that Rollins has won the world title, with Randy Orton wanting first crack, since he had beaten Rollins earlier that night, Lesnar wanting a rematch, because he himself wasn’t actually pinned, and of course, Reigns will antagonize with that Rollins came in to pick the pieces of two worn out competitors.  It’ll probably set up for a Fatal Four Way at the next pay-per-view that I likely won’t watch, but for the sake of setting up storylines for “the new year,” the WWE’s in good shape.

But basically, I have no problem admitting that I didn’t have high hopes in a Brock Lesnar vs. Roman Reigns main event, but what they did at Wrestlemania wasn’t just better than I had expected, it was actually really, really entertaining and enjoyable to watch.  We might not want to believe that Roman Reigns is world title material, but we might have to start believing that with some guidance and planning, Roman Reigns can be believable as a decent worker.