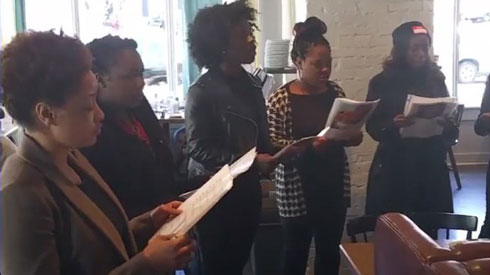 Long story short: racial activists barge into busy brunch establishments on a Sunday morning to flash mob protest over the shooting of a black man by local police.

I’ll be honest, this wouldn’t have gotten under my skin if one of the places that were hit up wasn’t a place that I’d recently discovered for myself, enjoyed immensely, and would gladly go back in the future for weekend breakfast.

Case in point, this group that protested at all these restaurants this past weekend, they’re protesting over the fact that a black man was shot and killed just days earlier.  Basically declaring the incident as solely an act based on skin color, and that naturally, “black lives matter.”

Never mind the hypocritical irony of declaring one group of peoples’ lives more important than everyone else’s, the fact of the matter is that I’m not entirely sure that these protesters bothered to check why the cops gunned down the guy they gunned down, but probably just checked the news to make sure that it was in fact, a black guy.

The truth is, the slain suspect was indeed black, but he was also in violation of probation.  Probation for a repeated history of incidents with the law, several of them which involved the suspect trying to ram police officers with vehicles.  Make no mistake, this guy who died, was no saint in his own right to begin with.  And protesters are claiming that the police killed an unarmed man.  Excuse me, a 3,000 pound vehicle, and a Maserati no less, easily becomes a weapon when the driver has intent of charging at human beings.

And given his history for basically trying to ram cars into police officers, I can’t say I blame the cops for opening fire on him, when he was basically, trying to ram into human beings with a 3,000 pound vehicle.

But let’s not let facts get in the way of trying to spread an agenda.

Honestly, I don’t know what I’d do if I were sitting at a restaurant, trying to enjoy breakfast and a hot coffee, and a whole bunch of people barge into the restaurant and start chanting rhetoric about racism.  Given the fact that their actions agitated people to the point where some got up and left without paying, I’d say that the only people hurt by their bullshit activism are the restaurants themselves.  These people will go about and tell people what happened where, and the chain reaction could hurt the business worse than it could hurt any of these mindless sheep, trying to send a message by deliberately making people uncomfortable:

“Disrupt traditionally white spaces that maybe are uncomfortable that racism is still a factor in our society,” said (an activist).

I actually think it’s hilarious that this quote came from a white guy.  And by naming “white spaces,” he’s already kind of propagating the problem of racism.  He’s like the poster boy for self-loathing white privilege who resent the fact that they’re white, or rather, they don’t have the privilege to bitch about racism, so they basically join sheep of other ethnicities so that they can feel what it’s like to bitch about racial inequality too.

This is also the guy that when I saw him speaking, felt the most massive and uncontrollable desire to Clothesline From Hell, if I ever came across this guy.  Because I sure as shit wouldn’t attack a black woman; not just because I can’t hit a woman, I’m pretty sure a black woman would be able to fight back, and put that fear of possible defeat into my head.

The bottom line is that I don’t like to throw around the word “hate” so much, but I think I hate all these people who are barging into restaurants and spewing bullshit rhetoric about racism.  There are far more losers than winners in these situations, and ultimately, they’ll get away with it every time, while diners’ breakfasts are uncomfortably ruined, and the businesses themselves will be associated with being a place where angry black protests occur, and people might walk out on checks.