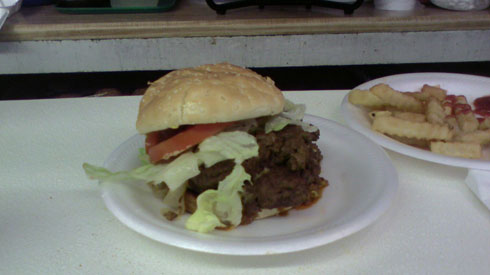 Long story short: Ann Price, better known as “Miss Ann,” passes away at the age of 72.  She was known for running Ann’s Snack Bar, where it served an iconic item known as the “Ghetto Burger.”

It’s no secret that the Ghetto Burger is one of the most well-known must-try hamburgers in the country, most notably decreed “the best” by the Wall Street Journal at one point.

And as much as I tried to get others to go to Miss Ann’s, or encouraged for people to put their anxieties of going into a scary urban black neighborhood aside for good food, I could never get anyone to go to Ann’s Snack Bar and try a Ghetto Burger.

Now, none of those people ever will.  Nobody ever will, again.

Thankfully, I can feel fortunate and be able to say that I have experienced, and enjoyed the magic that was the Ghetto Burger, as well as the whole Ann’s Snack Bar experience.  It was just once, but that’s certainly better than never, and I can treasure that tiny memory of having one of most complete burger entrees ever.

The above picture was my Ghetto Burger, and it was taken on my old Samsung flip phone that probably didn’t even have a full megapixel in resolution, that’s how long ago it’s been since I had eaten it.  But the memories are still clear, of driving down sketchy Memorial Drive, past pothole-riddled streets, dilapidated homes, and pulling into a tiny parking lot filled with weeds, and an SUV adorned in some wannabe rap star’s branding right next door.

The work colleagues whom I went with and I, we knew the stories of what to expect, and the strong advice to heed about behavior.  One of my co-workers poked his head into the kitchen, and with no bar stools available, immediately rushed back out, where we waited in a patio enclosed by screening, very likely done by hand.  The rules were to wait outside until Miss Ann invited you in, and quietly with minimal conversation, the type shared amongst co-workers were spoken, while we waited nearly 30 minutes for enough barstools to empty before Miss Ann waved her hand at us, signaling us to come in.

At that time, Miss Ann was probably 64 years old, and looked like someone at around that age.  In spite of her solo operation, and seemingly the only person in the establishment, there was a presence about her that commanded, and demanded respect.  Not just us, but everyone in the restaurant was clearly on their best behavior in the presence of Miss Ann.  The sound of cursing was a one-way ticket out of Ann’s Snack Bar, and such was way too harsh of a penalty, since it meant zero chance at getting to try a Ghetto Burger.

However, once the initial defense comes down, Miss Ann was as polite and reciprocating with respect as could be.  When our initial fear of saying the wrong thing dissipated, we explained that the WSJ’s endorsement of this place, literally down the road from where we worked had the best burger in America, we had to try it out.

Miss Ann chuckled and basically asked us what the Wall Street Journal was.  And when explained to her, she chuckled again, and asked us where her cut of their money was, if they were going to exalt her so greatly.  All while taking fistfuls of ground beef, with little need for measurements other than the knowledge of just knowing the appropriate amounts from decades of slinging Ghetto Burgers to hungry patrons.

Seriously, she probably could make everything on her small menu of burgers and hot dogs with her eyes closed.  But it was still something, to watch Miss Ann take simple household groceries, chop up onions, throw on cheese singles, and construct this behemoth of a trainwreck in a bun, and present to us on double-thick Styrofoam plates our own Ghetto Burgers.

As emasculating as it felt, it was something that I legitimately had to eat with a fork and knife, at least until it became clear enough to where I could pick up the rest and eat like a proper hamburger.  And lord almighty was it delicious; simple things like heavy seasoning and ground beef not mangled or rolled too excessively, led to this simple concoction of ingredients leading to this amazing burger.

Adding to the amazement was the cost of a Ghetto Burger; at least back then, it was still barely $9, for what’s basically a full half-pound hamburger loaded with chili, onions, cheese and bacon.  I felt like a sweaty greasy pig afterward, and finishing out the work day afterward was about as arduous as trying to clean a messy garage.  I willed myself to hit the gym later in the evening to have any possible chance at shaking off the greasy, decadent satisfaction of something so amazing.

It’s truly sad to say that this kind of experience will never happen again, not for me, or anyone else.  With the passing of Miss Ann, the city, and the rest of the hamburger and food-loving worlds have truly lost an incredible icon, and I hope in whatever afterlife she’s in, Miss Ann is putting the fear of god back into god, while they wait patiently for their own Ghetto Burgers.