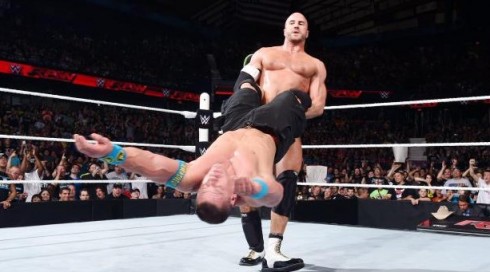 Sometimes I wonder what goes on in the mind of WWE personnel whenever they have a televised match on one of their flagship shows that absolutely tears the roof off the building.  Is it either an “oh shit, I can’t believe we just gave that away for free” feeling, or is it a “we’re creeping towards stale programming, and we really have to throw the audience a bone lest they start bitching with gas” feeling, or somewhere in between?

It’s no secret that wrestling television shows exist primarily to sell wrestling products, such as the WWE Network, merchandise and other endeavors, and that there’s typically a wall or ceiling of quality that they’re typically allowed to display, so that they can keep the really awesome things in their back pockets for those willing to shell out the extra money to see them.

It’s also no secret that without restriction or boundaries, almost any two wrestlers in the locker room could put on a five-star classic on any given night.  Seriously, just because they’re portrayed as jobbers, or not even wrestlers on the flagship WWE shows doesn’t mean that they’re not actually capable of wrestling.  Just a few months ago, there was rumblings of basically a borderline mutiny within the WWE locker room, because the company’s own developmental territory in NXT was putting on way higher quality of a show, with “lesser-known” talent from what’s basically portrayed as the company’s minor leagues (it’s actually more of a holding pen).

So, it’s kind of a pleasant surprise when the viewers actually get a super-high caliber match “for free” on one of the television shows.  That being said, I was most certainly colored surprised, and pleasantly so, when on RAW, John Cena and “Don’t Call Me Antonio anymore” Cesaro put on a 30-minute clinic, for the United States Championship to close out the show.

Given the fact that the segment started 30 minutes prior to the end of the show, I figured it would be a good, quick match with typical plot devices, and ultimately a Kevin Owens run-in, to help drive the Cena-Owens feud even further, that would end in 10-12 minutes, with the typical five minute commercial break in between, and that there would be some other storyline in the end, probably with Seth Rollins and/or Brock Lesnar that would close out the show.

Instead, the viewers were treated to this masterful, Wrestlemania-caliber match that saw a hundred near-falls, even more moves pulled out of the arsenals of both guys (despite having wrestled just the week prior), and excitement from start to finish.  It’s no secret that I’m a big mark for Cesaro, but at the same time, I’m also one of those guys that admires and understands the role of John Cena.  Sure, I kind of agree with the smarks who think Cena is this generation’s Hulk Hogan, polluting up the scene with schtick and rhetoric about being a good guy, but at the same time a guy like him is actually needed.  I wholly disagree with those who say Cena can’t wrestle, because that’s just completely false; the guy obviously can put on a classic every night of the week, but it’s the WWE machine itself that prohibits him from doing so, and mostly because his body would implode and give out if he did so every single show he was on.

Anyway, I would even venture to say that the match was so good, it might even have been a detriment to current storylines.  Sure, Cena and Owens have had two, very good matches in their own right, but will die-hard fans really be able to talk about anything other than the Cena vs. Cesaro classic from last night going into the rubber match?  It’s practically a blessing that there are two weeks prior to their PPV match at WWE Battleground, so that it gives fans time to forget about Cena/Cesaro, and give creative some time to pull out some more plot between Cena/Owens.  Because when Kevin Owens did run in, after the Cena/Cesaro match’s conclusion, it was pretty much an afterthought, as Cena countered a pop-up powerbomb, and Owens ran away with his tail tucked between his legs.  Crowd still going bonkers over Cena and Cesaro, and not Cena and Owens.

But who’s to say that this itself wasn’t an intentional passive-aggressive statement to Owens by management (AKA Triple H), since Owens has had a massive following and journey throughout his own respective career (as Kevin Steen)?  Let KO know that no matter how much of a pedigreed career he might already have had, this opportunity could very well easily go to any other guy if they wanted.  Like an ego-check, perhaps.

If there’s one thing WWE fans know, is that nothing is ever coincidence, because even when it is, creative can always re-write it that so it wasn’t.

Either way, John Cena vs. Cesaro for the U.S. Title on July 6, 2015 – that match was a classic.  Possibly a match of the year kind of match, and I highly recommend anyone who likes wrestling to watch it.  Extra kudos to Cena who has single-handedly taken the U.S. Title and given it so much prestige and value, that it’s simply the strongest belt in all of professional wrestling right now.