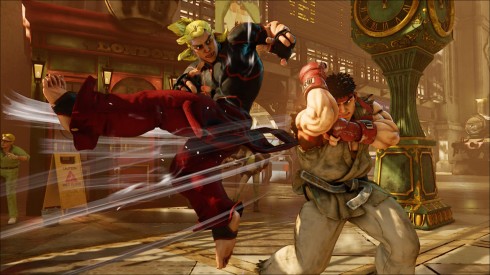 At this point, gameplay doesn’t really matter to me.  I’m so far removed from the fighting game scene, that all I am is a nostalgic bystander who reminisces about how good I used to be at Street Fighter Alpha, and anything prior.  Seriously, I’ve played my copy of SFIV like, twice.

However, that doesn’t mean that I can’t make snap judgments and make social commentary about the property that I’m still somewhat interested in, from a plot standpoint.

That being said, my mind is trying to figure out just what the hell Capcom did to Ken from an aesthetic standpoint.  As we can very well see (above), Ryu is still allowed to be wearing his traditional white gi, carrying forward the general tradition that Ryu is basically homeless, and the implication is that the white gi is literally all he owns, probably smells putrid, and has to be thinner than paper, to have literally been wearing the same thing for over two decades.

Considering Ken has been portrayed in the contrasting red gi to Ryu’s white, I’m curious to why Capcom has not decided to hold true to this standard?

I get that throughout the history of the game, there’s always been attempts to “make different” Ryu and Ken, and I figured subtle game change differences were fairly sufficient enough, as well as a different variety of palette swaps, but ultimately, they’ve always been the two dudes in gis that are basically the same sprite with different heads.

But this?  Too radical, and I can’t say that I’m a fan of it.  Honestly, actually, it appears that Ken is still wearing his traditional red gi, but that it’s for lack of a better term, underneath an UnderArmour shirt.  Why Capcom’s artists feel the need to clad Ken in an UnderArmour shirt in the first place is beyond me; knowing the money-grubbing ways of Capcom, perhaps there’s actually a sponsorship involved with UnderArmour, and cladding the game’s most popular (or frequently used) in their apparel is a great way to market.

Or keeping on the money-grubbing tangent, the game will have “plain” red gi Ken as a customizable outfit, but naturally, it will be DLC that players will have to pay $5 dollars for, despite the fact that it will undoubtedly already be on the disc at launch.

Anyway though, I think it looks stupid.  I’m sure the creative brief behind this design is the implications that Ken Masters is rich and successful, the lifestyle opposite of his life partner Ryu, and that he can afford to put an UnderArmour shirt on over his gi, or that wearing a tight-fitting shirt accentuates his musculature or something like that, but the bottom line is that it looks like rubbish.

All I can think of is that putting on a form-fitting shirt is basically the equivalent of the former WWE wrestler MVP, who was notorious for wrestling in a stupid looking get-up, allegedly because he was not in as great shape as he wanted to be in, and the full-covering singlet of his kind of hid his mediocre physique.

Does Ken have a mediocre physique, needing to be hidden behind UnderArmour?

Secondly, because he’s wearing a form-fitting UnderArmour shirt, it makes the part of the gi that is exposed, flap around like excess baggage.  It’s like a cape for his ass, flapping around arbitrarily, like a Jeff Hardy snot rag or something.

It would be kind of awesome, if the game completely ditched Shotokan for Ken’s fighting discipline and incorporated some no-shadow kick skirt kung-fu to make use of the gi flapping around.  Like fireball+K becomes a flick of the skirt that gets the opponent to react early, setting themselves up for a mean kick combo (for 280 hits).  I mean, who needs hadokens and shoryukens when you can fight with your skirt?

And subsequently, the skirt could be a detriment as well, since naturally Ken has to be OP, because he always is, and needs something to bring him back to balance.  But like, Zangief, or Abel, or any other guy who is throw-reliant can grab onto the flapping skirt, and use it to drag Ken to themselves for a Spinning Piledriver, or any other throw-super.

The bottom line is that I’m quite perplexed on the artistic direction of Ken going into SFV.  I don’t understand the perceived logic, and frankly I am not a fan of how it’s looking.  As guys get older, they should start giving less fucks about their appearance, and develop a chip on their shoulder or something, to prove that they can still hang with the times, and not be usurped by youth.  Not putting on an UnderArmour shirt to hide their aging physiques and inflate the appearance of their muscles.