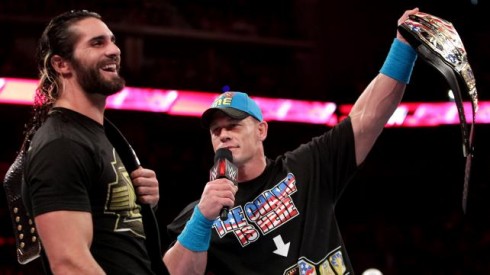 On this past RAW, John Cena cut a promo where he basically said everything smarky wrestling fans like me already knew: the United States championship is way more valuable than the World championship.  The thing is, up until last night, those are the kinds of things that the WWE, much less the wrestlers themselves aren’t necessarily supposed to acknowledge, especially on live television.

Needless to say, I found it very amusing, and one of those “Oooh” moments, but the formula doesn’t change; if the WWE is allowing it to happen, then it’s very much no longer breaking meta, it’s now a storyline.

The thing is that everyone knows it’s true, be it fans, the wrestlers, and the WWE organization itself.  The U.S. title is way more prestigious than the World championship is right now.  It’s just more amazing that they’re acknowledging it so blatantly on live TV.  It’s almost as if the WWE is trying to one of those preemptive power plays, where bringing the awareness to the forefront strips the power of it in the background, where an opinion like this would typically ferment.

Personally, I don’t dislike John Cena like the rest of the sheep pretend to hate him; he’s an extraordinary worker, still vastly at his physical prime, and is always striving to better and raise the bar while in the ring.  Sure, he’s a colossal tool as Total Divas portrays the “real” John Cena out to be; more businessman than actual human being, but the fact of the matter is that when the cameras are rolling, he refuses to let anyone overshadow him, elevating his game just a little bit more as the years have ticked by, and is still capable of delivering five-star matches on any given night, if the reigns are taken off.

With his current gimmick of the U.S. Title Open challenge, he’s been on RAW every single week, delivering a title defense against absolutely everyone, which had produced some fantastic matches that even a habitual 1.5x speed watcher like myself will stop, watch at regular speed, and enjoy the show.  Matches against Adrian Neville and Sami Zayn were top notch, the more-recent match against Cesaro was probably match of the year, and it’s even been used as vehicle to elevate intriguing storylines, like the introduction of Kevin Steen Owens to the main roster.

It goes without saying that the U.S. Title has been the most valuable asset to the company right now, with the level of talent performing their butts off in its name every single week.  All while the World championship picture is this stale circus revolving around Seth Rollins rants, Brock Lesnar rampages, and albeit awesome, Paul Heyman promos.

It’s kind of ironic, because the unspoken manifesto of the company following this past year’s Wrestlemania was that the World championship would be used to surround the young and promising talent of the future (Rollins, Dean Ambrose, Roman Reigns), while the “lower” tier belts, like the U.S. and Intercontinental, would be elevated a little bit, but to be more of a holdover prize for the old guard (Cena, Daniel Bryan).

Whether it’s on purpose, or the fact that guys like John Cena relish in the challenge of taking the lemon and making lemonade, it’s pretty damn clear where the power and prestige currently resides, when it comes to the values of the championships; and it’s certainly not the one with the giant company logo on it front and center.

I’m just surprised that the company itself went ahead and basically admit it on live television.