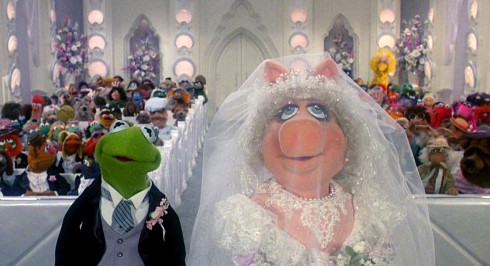 TL:DR: Eternal lovers, Kermit the Frog and Miss Piggy are breaking up.

Ultimately, I think this is one gigantic ploy in order to drum up buzz and interest in The Muppets in general, but still, do all storytellers have to go to such dramatic lengths in order to do so?

Haven’t property creators learned from stuff like Peter Parker and Mary Jane?  I bet money, that FOX will regret separating Homer and Marge Simpson, and eventually bring them back together.

I guess what I’m getting at is it certainly feels like romantics at heart can’t even get everlasting examples of love and bonds, even from fictional properties, because presumably, divorces and separations just seem like too juicy and potentially profitable plot devices to utilize for attention, gain and/or profit.

Admittedly, I’ve never really been that big of a fan of the Muppets in general (although I was really fond of The Muppet Babies cartoon), but I among others was aware that when the smoke cleared, it was still Kermit and Piggy, together forever, or so it was supposed to be.  I didn’t care that much, but it was still nice to see them as this fictional pillar of what the romanticized idea of romance was supposed to be.

Reading shit like this has got to be great for people who have reluctance of embracing romance in general; I mean, if fictional characters are eventually doomed to suffer heartbreak, what to do we as actual human beings stand a chance?  At this point, why bother?  Sex?  Companionship?  Financial teaming up?

Ultimately, I think the world in general is growing more and more desensitized to the idea of splitsvilles, break ups, divorces and separations.  I mean just this week, there were like three stories of famous people all breaking up with their spouses.  Again, if celebrities and all their privilege, wealth and vastly more advantages in life can’t keep it together with their spouses, what do “regular” people stand a chance?

Either way, it’s just sad to think that nowadays, even fictional characters aren’t being allowed to remain stable and together, as long as the endless game of attention and ratings is what drives them.  So many people try and use fiction to momentarily escape reality, and how much it can potentially suck from time to time; being slapped in the face with break ups from a property as universally wholesome and family-friendly as The Muppets is a little bit much of harsh reality to be subjected to.