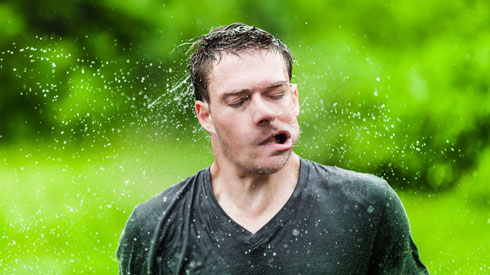 I go to the gym on a consistent basis.  It used to be five days a week, but has been reduced to twice a week, solely on weekends, due to a change in my life’s routine that has really only made it feasible for me to go to the gym on Saturdays and Sundays.  In lieu of sweating it out at the gym five days a week, I try to supplement my self-imposed need for exercise on the weekdays with some outdoor jogging, regardless of it’s 85 degrees or 105 degrees.

I exercise because I’m not really a fan of dieting, and the fact that I exercise is probably the one thing that’s preventing me from full-out blowing up into a 390 pound behemoth, trying to get myself onto TLC’s My 600-lb. Life.  That being said, I probably won’t become a cut and chiseled Adonis-like physical specimen unless I start dieting, and make some alterations in the way I work out to optimize my physical exertion into creating freakishly formed musculature.

Additionally, I like the idea that exercising makes me feel good about myself; perhaps its the endorphin rush from whenever I complete a workout, or it’s the fact that I’m a snob that generally likes the idea that the vast majority of the world is lazy and doesn’t work out, so the fact that I do makes me feel good.  Or maybe it’s the fact that despite the fact it doesn’t really show that well on me, I’m developing some degree of functional strength, and when it comes to it, I probably won’t embarrass myself if the need ever arises for functional strength in order to contribute towards some sort of function that requires it.

Either way, I go to the gym on somewhat of a schedule, because I want to strengthen myself.

The thing is though, is that the drawbacks of being a hard worker at the gym means I have a tendency to sweat.  This is exacerbated by the fact that I’m a weirdo and do my cardio first, because I feel that it warms up my body and burns off all of the superfluous energy that might make some lifts feel effortless and harder to reach a true failure point to where I might not make any progress.

Therefore, I sweat, a lot.  Like seriously, I sweat so much that stating the obvious fact that I sweat through my gym shirts doesn’t even begin to describe how much I sweat.  The fact that I can take my shirts after a workout, hold it over a sink and literally wring out a couple of tablespoons worth of sweaty fluid out of my shirts is a little more sufficient at describing just how much I sweat when I workout.

So when I’m walking around at the gym, I look a little different from all the other guys in the gym, outside of the fact that I’m not the African-American equivalent of an Abobo from Double Dragon.  I typically wear white shirts because it kind of hides it better, but for the most part, it looks like a bucket of water was thrown at my chest whenever I workout.

It makes me feel uncomfortable and subconscious knowing that women stare at me when I’m like this.  If I want to go from the pullup and dips rack to the free weights, I must plan my every step to try and be as invisible as possible as I traverse through the array of abdominal and hamstring/butt exercising machines that all the women typically occupy.  I’m most definitely taken and not on the market, but I don’t have any rings or jewelry that signifies such; I state such not because I’m worried that they want my gross sweaty body like a piece of carnal meat, but so they don’t assume that the girl that’s got the dubious dishonor of being my girlfriend doesn’t have to deal with theoretical pity for being “the sweaty guy’s girl.”

There are some men that want the attention of those around them.  Those that are empowered by the stares and gazes of women.  I am not one of them, because I do not have the body of Adrian Neville, therefore the stares and looks I get are undoubtedly ones of puzzled disgust, or some strange animal magnetism.

After about 100 minutes of my typical gym workouts, I’m spent.  My legs are already weary from 22-32 minutes running on a treadmill, sweating my body dry, and my muscles are all primed and prepared for the inevitable soreness that will begin to take hold over the next evening’s slumber.  Salvation lies in the fact that I can trudge to the showers, wring out my sweaty shirts, cleanse myself, and leave in fresh and dry clothing.

But nothing will change the self-consciousness and the mental awareness of all the judgmental and prying stares of the women at the gym who are clearly out to make me uncomfortable and feel paranoid about myself.

Think this post is utter bullshit?  Yeah, me too.  But imagine reading the female equivalent of this, that’s actually read by more than six people.