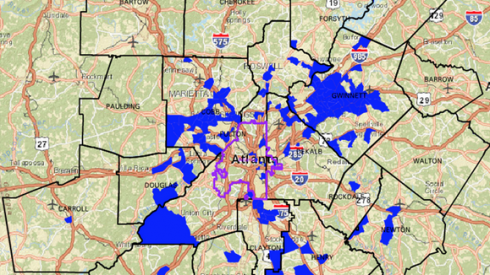 Sometimes when I feel like I have nothing to motivate me to write things, all I have to do is open up the virtual newspapers, and the city will provide.  Typically, I look for one thing that gets the synapses in the head firing for words, but sometimes, there are days like this where there’s so much bullshit and rhetoric to want to call out that I end up with more than one.

I won’t specify which, but I live in one of these blue-shaded areas.  According to the article, the blue-shaded areas signify that “no one race or ethnicity comprises more than 50% of the population.”  All I have to do is drive down my street, and drive past the nearby* school and go to the nearby* grocery store to know that this is irrevocably false.

Either that, or it’s the simple fact that this data is based on a census from five years ago.  I remember when the census survey came to me; it was a nondescript piece of mail, that almost didn’t look like it was for real.  Well, it did look like it was for real, but since nowadays so many car dealership and spam mailers try and use the tactic of sending out mail that looks real and legit, I almost considered the census to have been one of those things.

The bottom line is that this map is full of shit, and not even remotely possibly accurate.

Next on the daily shit show, we have this story about how cops are going undercover to bust people who jaywalk. (CBS46)

To this, I say it’s about god damn time!  Now if only this could apply to within the city, or everywhere else not just limited to Buford Highway, and Brookhaven.  This is the kind of shit that I like to see.  Sure, Atlanta has a large enough problem with daily shootings, robberies, killings and other terrible crimes on a regular basis, but it feels like sometimes that such is justification to kind of let all the other, smaller misdemeanors slide.

Far too often, I’ve driven down Metro Atlanta roads, and watched as people waltz in the middle of the road, with the same devil-may-care body language, and almost daring people to hit them.  As if it would be the drivers’ faults they got run down or something.  I’ve made no secret that harbor zero pity for those people who get killed when hit while jaywalking, but it’s still a traumatic experience for those who had the unfortunate responsibility of being the one hitting them.  Sure, they might not be found guilty in the court of law, but it’s still mentally strenuous knowing you may have killed someone, or at least physically crippled another human being, because of their neglect.

Either way, I’m 100% on board with this shit, and I’ll champion every single time I hear of someone actually getting busted for jaywalking.

Now if only we could get some news like this in regards to HOV lane violators.  I still stand on the notion that the national debt could be wiped out if the appropriate number of HOV violation penalty fees were cashed in on.

Finally, this particular story was national news, but it’s the way the AJC handled it in their own sharing of it that I find particularly amusing.  Basically, a story out of NorCal broke out that a group of black women were kicked off of a Napa Valley train trip, and it exploded on social media as this racial issue, with the women claiming that they were kicked off solely because they were laughing too loudly, and that they were black.  And naturally, whenever the black card comes out, the shit hits the fan, and is flung in all directions from the spinning blades.

Obviously, there’s only one side of the story that’s actually being paid attention to, and not the fact that the women were getting hammered on wine, walking around between train cars while yes, laughing loudly and being generally boisterous, but let’s not let facts get in the way of an agenda.

The point is, the AJC typically has a open commenter policy, and I’d be laying if I didn’t enjoy deliberately clicking on the comment sections of articles that I just know are going to be entertaining shit shows and battles of straw men, but as it pertained to this particular story, not only was there no comment section, but the following disclaimer about internet commenting in general:

If you’d like to comment on this article, please send us an email.  Appropriate comments will be added to this file.  Anonymous comments are fine (choose a “handle,” if you wish).  But please be respectful

It’s like the AJC wants to have this article discussed, but they just knew that if not moderated, would devolve into a racial shit show.  This, I found to be quite amusing.