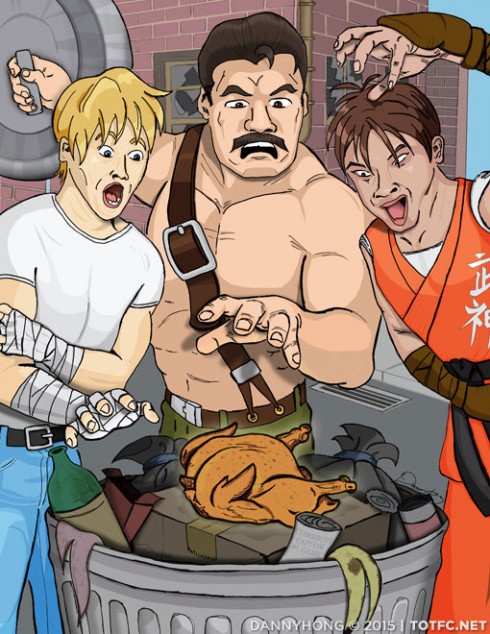 This is an illustration I did back in the winter, that I had submit to Udon when they were compiling artwork for the Capcom Fighting Tribute book they recently released.  Now anyone who has or has seen the book already knows that I did not make it in.

Admittedly, for someone who has to deal with rejection and criticism on a fairly regular basis in my line of work, this was a tough pill for me to swallow, and I’d be lying if I said I wasn’t dejected, deflated, and downright resentful for not making it in.  Me, and likely hundreds of other artists who undoubtedly ended up in the same boat.

Sure, I’m not the most talented illustrator out there, and I’m by no means entitled to have been a shoe-in to make it into the book.  I knew this when I decided to put forth the effort to do this in the first place, but there was tactic behind my choice of artwork, where I tried to accentuate strengths and hide weakness.  I went with a lesser-heralded Capcom property like Final Fight, instead of the heavy Street Fighter and Morrigan’s tits AKA Darkstalkers routes that would likely saturate the submission pool, and I took a route of humor, hoping portraying a popular video game trope, like the trash can chicken for full health restoration, illustrated out, might warrant some recognition.

Needless to say, my strategy didn’t work, and my artwork wasn’t good enough for Udon standards.  Sure, perhaps if I were a better practiced illustrator, I might’ve been able to do better.  But still, this particular rejection stung me hard, and I was sad, upset and resentful in this particular instance.  To some degree, I still kind of am, honestly, but I’ve gotten to the point where I can actually look at my submission again, and I’m taking the time to write about it, with a head less clouded than it was back when the results came out.

Basically what really ate at me was the fact that I’ve seen many of Udon’s prior tribute books; they’re often times full of artwork that is breathtaking and mind-blowingly fantastic, but the thing is, it’s painfully obvious that there’s a hefty portion of artwork displayed that show a complete lack of understanding or actual tribute for the properties.  Like you’ll see shit like Ryu fighting Vega, in Blanka’s stage, as if they’re eternal mortal enemies, or stuff that heavily implies that people don’t really understand that Morrigan and Lilith are one and the same and are instead shopping for clothes together as if they’re sisters or BFFs.

The art often times great, but it’s super clear that the people creating them don’t actually know much less care about the properties, as much as they simply want to get their names and creations into a publication.

To me, that’s not really so much of a tribute.

It’s kind of like . . . hiring escorts to attend your party so that it appears that there’s lots of attractive women present.

Ultimately, that’s the thought that went through my head when dealing with this rejection.  I’ve long been a fan of many of Capcom’s properties, I’ve played them to degrees where I know how to make jokes or references that would resonate with those players that are as equally vested, and I really hoped that my strategy of humor from a lesser-heralded franchise just might get me in.

And when I didn’t get in, I wondered just how many hired escorts were?

The thing is, now I’ve seen the book; Jen made it in (deservedly) and got a comped copy.  And going through the book, a lot of my suspicions were confirmed; it’s heavily weighted in Street Fighter and Darkstalkers, although they make sure to touch as many bases as they can, hitting franchises such as Power Stone, Star Gladiator, Captain Commando, Puzzle Fighter, Pocket Fighter and even Knights of the Round.

However, despite the massive size of the book, there were ultimately only four pieces that were from Final Fight.  Final Fight certainly is no Street Fighter (although most of their characters have crossed into it now), but it’s definitely a greater franchise than like Power Stone or Star Gladiator.  I know the line is murkier that divides FF from SF, and the occasional Cody, Guy, Poison and even one particularly fantastic Rolento showed up in other pieces, but as far as the “just” Final Fight section went, they sure as shit deserved more than just four pieces.

And naturally, perusing through the rest of the book, it was basically more of the same from all the other Udon books.  Artwork, some of it undeniably fantastic, but the equivalent of visual fluff.  Whether it’s an extremely sexy portrait of Morrigan, a colossal mish-mash of the entire Street Fighter cast, how much of Felicia’s genitalia can be shown without showing any genitalia (from Japan, naturally) and shit that’s so abstract, they basically confused their way into the book, there’s a lot of pieces that simply have no clue.

And then there’s the occasional piece where I just straight up think mine was better, but those are way more sparse.

I’m taking nothing away from the artistic talents of the artists of some of these clueless pieces, but some of them are just so painfully obvious that they’ve never played a level of Final Fight or Knights of the Round, and would be dumbfounded if someone told them to rotate a joystick in a hadoken.  But because they can create a really, really sexy drawing or parody a historic piece of art, they can get in.

Sure, it’s a no-brainer when I get beat out by professional illustrators, but it really chaps my ass when I see shit like overdone pixel art, or blatant rips from the My Little Pony style or something popular, just themed to Street Fighter get in, then I question the curators at that point, and it makes me skeptical and less inclined to try and participate in anything they call out for in the future.

Either way, this was my submission.  As dejected as I felt when I didn’t make it in, now that I’ve seen the supposed all-star squad that did, frankly I don’t feel so bad about my piece anymore, to where I can look at it without seeing complete failure, and to where I can actually put some words about the experience down for my six readers.  Frankly, I shouldn’t take it so personally or be so shocked if/when I my perceived place at the party is replaced by an attractive hooker instead.