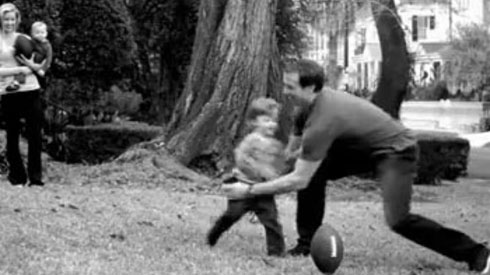 So in this Chase Bank commercial, Drew Brees’s son kicks a football in the yard; but because he’s the son of Breesus, it’s implied that he has some genetic football talent passed down onto him despite the fact that his dad is a quarterback and not a Gramatica.  That being said, the ball goes sailing at a high velocity, to such a magnitude it breaks through several houses walls and windows, much to the chagrin of Drew Brees himself.  Bewildered neighbors stare at the carnage caused by the lead food of Brees Jr.

But no problem, because Drew Brees is an NFL quarterback, Drew Brees is rich as shit.  And thanks to his handy new Chase banking app, he’s able to parlay chunks of his shit-rich to his various neighbors whose homes have incurred damage at the leg of Junior.

I’d like to point out the part where Drew Brees wires $200 to one of his neighbors for a broken window.  Because I am currently dealing with a similar situation currently, however I cannot say that a young place-kicking prodigy kicked a football through my window.  No, it was just a freak accident involving my landscaper, a mower, and an errant stone in my yard that went sailing into my glass, shattering it.  It is not a big deal at all, considering it technically happened last year, and I’ve just been too lazy to deal with it until more recently.

Basically, this is where I ask my six readers, if they even remotely know where to begin looking for someone to repair this?  A cursory Googling of “window repair” typically leads to like 60% of results being auto glass repair, and not residential.  And then the remaining 40% of results turns out to be people who wish to replace entire windows, and not anything remotely close to simply replacing a broken pane.

Long story short, I got estimates for window replacement, which turned out to be well past the $1,000 mark, much to my dismay.  Trying to get a second opinion from a business not The Home Depot, I received some good news in the form that a new window isn’t what I need, but a re-glazing of my pane; which would be considerably less than replacing the entire window outright.

But then I learned that it’s also pretty impossible to find anyone who does window reglazing, much less willing to come out to where I live.  Ultimately, I found a guy that I’m really quite optimistic just might work, but I also had to cold-call at least four other businesses that have scheduled appointments, no-showed appointments, and absolutely failed to deliver anything at all.  Leaving me quite frustrated and dejected that I’m practically begging people to come take money from me, and nobody wants to do it.

The point is, in the commercial, Drew Brees wires a neighbor $200, and it’s assumed that everything’s good and square.  That is bullshit.

I’m probably going to spend ~$200, sure, but that’s also several days of where I’ve had to take time off work only to get no-showed, the anxious time of waiting for people to show up to my house, take measurements, and hope they’ll actually come back, and/or not bend me over and financially stick it to me.

In the end, Drew Brees is a cheap motherfucker who only covered the cost of the materials for his son’s badly booted squib kick.  What the commercial doesn’t show is the two weeks of his attractive cougar-y neighbor ripping her hair out when she can’t find someone instantaneously to come fix her window, and when she does, she’s cursing Drew Brees for barely covering the cost of the damage and not the labor.

And the next time she watches football with her family, she’s secretly hoping Ndamukong Suh crushes and murders Drew Brees.