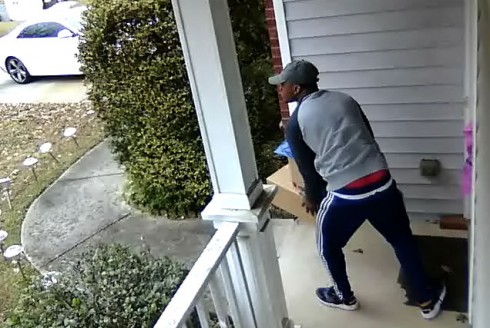 Despite my tepid enthusiasm for Black Friday shopping season, I still did a little bit of shopping.  Such is somewhat of a tradition in my household, and nothing says the holidays have arrived than spending a bunch of money on things that we don’t actually need, but still cave into the general consensus that it’s shopping time, when Thanksgiving rolls around.

So for the better part of the last few days, it’s been that Christmas-y feeling of checking the myriad of emails that have shipping tracking codes, and checking statuses, to see just what we can expect to arrive, unbox, and be excited to receive, because getting packages in the mail is almost always a fun thing.

A while back, a package was stolen from our front stoop; although never confirmed definitively, the fact that there was a delivery confirmation, but then no package, led to Jen and I determining that it had to have been stolen, given the fact that there are several hours of many of the work days in which someone might not be able to open the front door, combined with the fact that USPS, UPS and FedEx are all incapable of using common sense, and leave packages in plain sight in front of our front door, instead of the slightest of pivoting and placing them behind the shrubs.

This infraction made us reconsider our home security system, and we therefore upgraded our system to one that incorporated video cameras.  Our logic would simply be that video evidence would be fairly sufficient at deterring the vast majority of would-be thieves, burglars and other piece of shit criminals.

Welp, that would be a flawed logic, after all.

I came home from work the other day, and had that momentary disappointment when I didn’t see any packages at the front door, considering the fact that for the better part of the last week, there had been packages on a fairly regular basis.  I didn’t think anything of it; it was simply a day in which we received no packages in the mail.

This morning, I opened my inbox and decided to check the remaining shipping confirmations were still unaccounted for; one particular retailer’s latest updated stated that my package had been delivered to my home, yesterday. Confused, and suddenly alarmed, I logged into my security system, and brought up the camera log, which records clips every time movement triggers the motion sensor.  At 11:37 a.m, I see the mailman, dropping off two boxes and a package envelope; in front of the front door, and not behind the bushes, as is the norm.  At 1:16 p.m., a man on a segway whirs up to my front door, and hooks a giant pink donation bag and note to my door knob.

And then at 2:02 p.m., a black male with a cap on, and skinny-fitted sweatpants moseys up to my front stoop, swiftly picks up both boxes, the package envelop, and hustles back to his car, which is parked in my driveway while he’s performing this heist, to add insult to injury.  The kicker is that I can see the make of the car as it backs out, and it’s unmistakably an Audi, likely an A3 or A6.

A sack of shit driving a luxury Audi decided to steal packages of clothing right off of my front door.

Granted, given the nature of thugs like this, the car was likely stolen in the first place, like the two pieces of shit who kicked in my door like five years ago, but for the sake of established facts, someone driving a luxury vehicle saw boxes on my front door and decided to steal them, even though a vague likeness of him was captured on video.

Make no mistake, there’s a cauldron of upset emotions swirling around in my head, even now, a day later, and several hours after I’d discovered this crime against my household.

When the day is over, I’d rather have some packages get stolen off of my door stoop as opposed to my house attempting to be invaded again, but the general sense of violation and destroyed trust in my community is all the same.  I’ve been way quieter on this top than Jen has, because I guess I’m frankly having a slower time processing all the information, and wondering what my options really are, not to mention I don’t really feel like how putting a spotlight on my house always turns into a bunch of backhanded critical remarks about where I live, and how I should move somewhere else, as if we were oblivious to this obvious assessment, and could magically erase an underwater mortgage and make it happen at the drop of a fucking hat.

Naturally, the police had been notified, a report filed.  They’ve received the video recorded by my home’s security cameras.  Jen’s taken to the interwebs with the video, and supposedly it’s been shared a few times, and possibly might become newsworthy.  Although I’d love to hear that this piece of shit gets caught and spend some time behind bars, I’m simply not optimistic that such is actually going to happen.  My camera only records the front door, not to mention the car pulled into my driveway, so any possibility of getting the crucial, game-changing plate was impossible.  I can’t exactly see every single white Audi A3/A6 being driven by a 20-something black guy getting stopped and examined just because the perpetrator stole some boxes of clothes.

Honestly, I don’t even really care about the stolen goods.  The merchants have graciously replaced most of what could be stolen, and refunded what couldn’t, even though such isn’t necessarily their responsibility.  That’s good graces on them as companies, and wanting to make right to customers, which I can admire.  I want to be upset with all the incompetent delivery drivers for constantly leaving packages out in plain sight in spite of having easily obscuring bushes available to them, but it’s not their fault that thieving pieces of shit exist.  I see people discussing this on Jen’s Facebook wall, and some inserting a strawman argument incorporating the incompetence of the police; frankly it’s not their fault either, and perhaps if they had intel like a plate number, or recognized the perpetrator things would be different, but it’s not their job to make wine out of water, without the necessary means either.

Again, it’s simply the damaged faith in people, humanity and community that upsets me the most.  It’s absolutely absurd that I can’t have faith in my own residence, to send common mail to my own home, without having concern that pieces of shit thieves want to propagate stereotypes.  It’s absolutely absurd that no matter what, there’s always concern that my home is being cased or sized up, so that someone can again attempt to break in, and steal things from the inside.

When we first installed the cameras and upgraded our security system, I remember how proactive I was in learning all the odds and ends of the platform.  Making sure that both Jen and my phones had the app installed on them, and could access the camera remotely if necessary.  I checked the video logs on almost a daily basis.

Over the last few months, I acknowledge that I’d become lax on a lot of those little habits; sure, even if I hadn’t, it’s not like knowing a thug is stealing shit from my property, I’d be able to do anything about it, from my work office, but the fact of the matter is that I let my guard down, and something like this happens.  I actually let myself grow complacent that things like this weren’t going to happen, because of magic video taking capabilities that should deter people from doing rotten things.  How naive of me to think that.

Pieces of shit are going to do piece of shit things; having a video camera on them only lets you see it going down, first hand.  I fucking hate the world, sometimes.